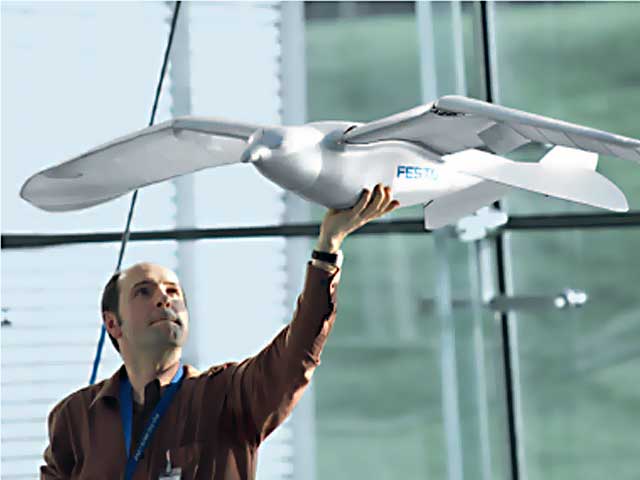 The bird flying engaged human imagination since ancient times till today. Though the first human flew for the first time into the late 19th century, the bird flying was successfully recreated in present days. SmartBird was made from Festo Corporation, one of the biggest companies concerned with researches in the field of bionics. This bird has a wingspan of nearly 2 meters (1.96m) and very low weight (450 grams) due to the materials she is made of – carbon fibers and polyurethane foam. Wings are powered by a little electric motor which is connected to two wheels each one attached to a pole. So when the wheels rotate both poles move upward and downward and the wings are moved too. Within the wings are placed servo motors which control and adjust the angle of attack of the wings thus giving the forward motion. The tail controls the direction of the flight.

This bionic bird is able to start, fly and land autonomously without additional devices and mechanisms. SmartBird flight is very similar to the flight of real birds and observed from a distance could hardly be distinguished from the live bird. While watching this flight my brain recalls the memory of the ornithopters from Frank Herbert’s “Dune”.