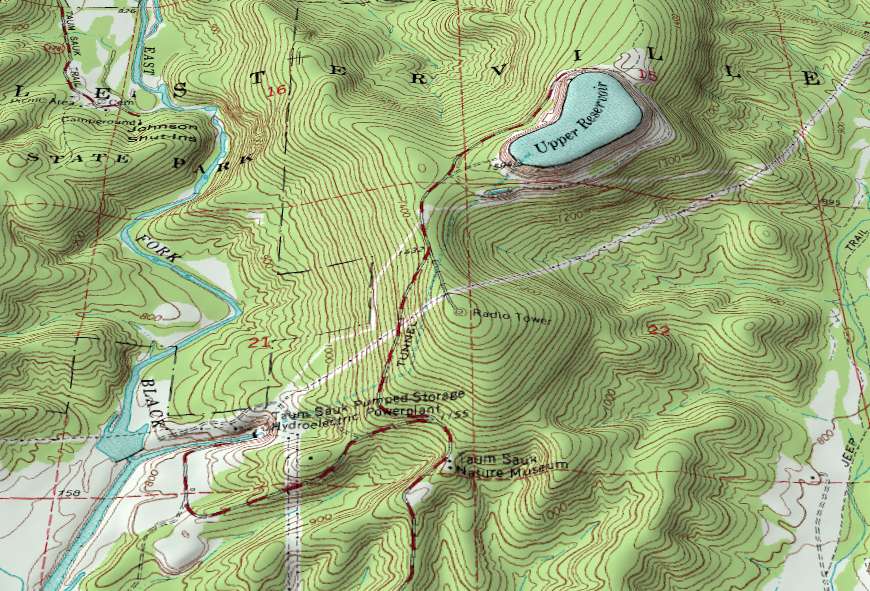 Normally the hydroelectric power stations are designed to generate electricity by catching and enhancing the natural motion of the water flow of a river. The usual hydroelectric power station requires building of semi-natural water reservoir by building a dam wall on the way of a river, which leads to accumulation of huge water amounts. This accumulated water causes huge pressure on the dam wall which is used to generate electricity by letting the water pass through turbine tunnels.

This way utilizes the Earth gravity and the natural water flow of a river for power generation. It requires some expenses only for maintenance of the dam wall and the facilities on it.
But the Taum Sauk Hydroelectric Power Station belongs to more specific type of power plants: a pump storage hydroelectric power station. There is no natural water inflow and the power generating reservoir is filled by few pumps.

This power station is located in St. Francois Mountains in Missouri, USA. It was built by Ameren, a corporation that was born from merging of Union Electricity Company and Central Illinois Public Service Company.
Taum Sauk consists of kidney-shaped water storage atop of Proffit Mountain. To generate electricity, the water is discharged to a lower storage on the East Fork of the Black River. It happens during day time to support the increased energy demand. The huge “kidney” is re-filled with water by using pumps, which are powered by the excess of electricity produced by other energy stations. Tauk Saum is obviously an energy consumer but it is still profitable because of the fact that the night generated electricity has lower cost. In fact, the facility acts more like a huge battery that stores the excess of power.

We may decide that this is new system, but we will be wrong if we do so. The Taum Sauk Hydroelectric Power Station is operational since 1963, or more than 50 years old. Initially the station was driven by two reversible units that utilized the function of both turbine and pump. The overall capacity of energy generation was 350 MW (175 MW for each unit). Those units were upgraded in 1999 and reached overall capacity of 450 MW (225 MW each). The upper reservoir contains around 5.7 million cubic meters of water behind 30 meters tall concrete wall. The water storage is connected to the power plant via 2100 m long tunnel.
While reading the information about Taum Sauk Hydroelectric Power Station I started wondering about possible modification of the system. What about using solar panels to power the pumps? My idea is that the solar energy generated through the day is stored in some sort of big batteries (or by any other suitable mechanism). After the sunset this accumulated solar energy will power the pumps to fill the general water tank and production of energy will flow continuously. And no power from the grid will be consumed. I must admit that I am not an engineer and don’t know if the idea is possible for achieving with current technologies.