This creepy-looking helmet called "The Isolator" was invented in 1925 by Hugo Gernsback to cut down audio and visual distractions. Distractions are all around us, whether it's ambient noise or the colorful items around you, and it's sometimes extremely difficult to concentrate on the task you need to finish. A 1920's anti-distraction helmet, known as the Isolator, was invented to address this issue. However, the creepy-looking helmet may be more of a horror show prop rather than an innovative distraction-free device. 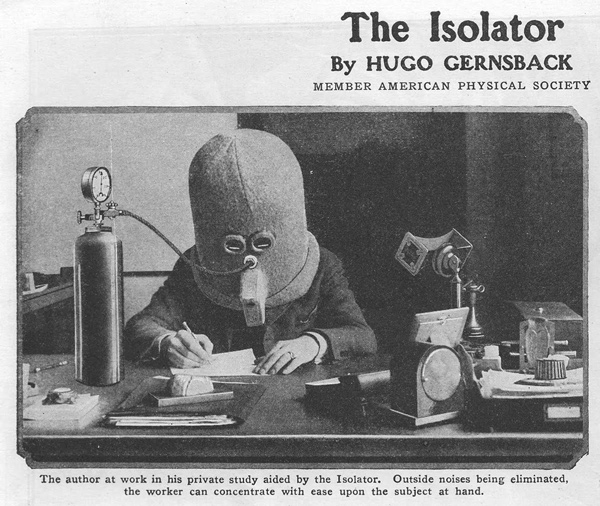 An innovative device or a horror show prop?

If you're living the engineering life, either as a student or as a professional, then you would know that the key to getting your work done right is by concentrating all your energy on the task you're given. But distractions are everywhere and even the slightest noise or flicker of a light could easily derail you from your train of thoughts. And if it happens to be one of those days when you just can't focus, distractions could easily turn to hours of procrastinations and that's just unproductive.

Back in 1925, the European-American inventor Hugo Gernsback proposed a solution to combatting distractions. Gernsback published his anti-distraction helmet invention known as The Isolator, which he claimed to eliminate 95% of background noises. 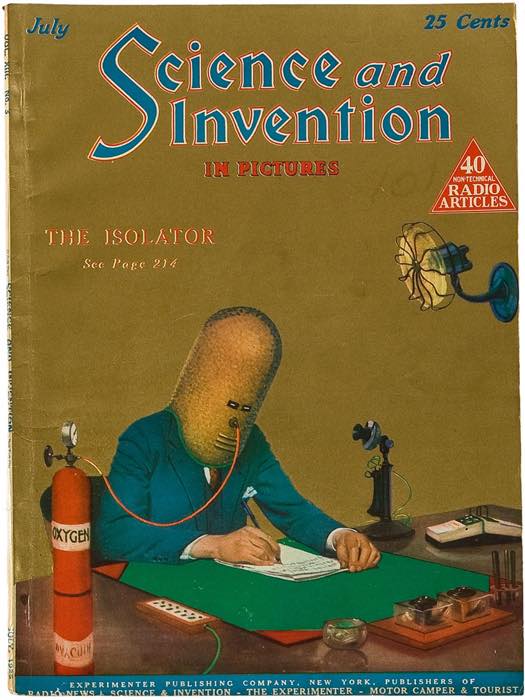 The Isolator was also designed to minimize visual reach granting the wearer absolute concentration on whatever he is doing. The helmet's tiny eyepieces were apparently painted black allowing only a small visual clearance through a thinly scraped segment. It may not be such an effective anti-distraction solution if the wearer is claustrophobic. To address the breathing requirement, Gernsback introduced an oxygen tank extension to the helmet. Apparently, those who attempted to wear the helmet felt sleepy inside the quiet, dark, and creepy helmet. If worn for extended periods, the helmet is bound to be filled with recycled carbon dioxide so hooking it up to an oxygen tank seems like a sensible idea.

The Isolator may seem like a forgotten and forlorn invention but the concept has been recently revived by the design company Hochu Rayu with the Helmfon helmet.

This modern anti-distraction helmet was essentially designed to isolate the wearer in solitude amidst a bustling working environment. So, the concept of the Isolator is not such a ridiculous idea after all. Unless you're socially conscious and care about what your colleagues and workmates think about you. 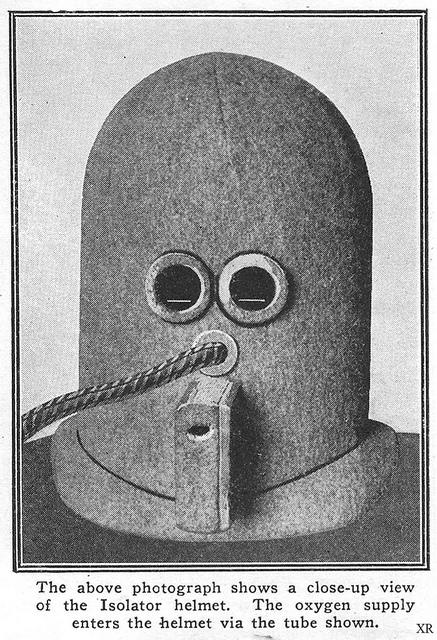 Some refer to Gernsback as the "Father of Science Fiction" but others may disagree. In terms of futuristic inventions then perhaps Gernsback can claim this title but when it comes to literature then maybe not. I mean, how about the much earlier science fiction novels such as The Strange Case of Dr. Jekyll and Mr. Hyde or Mary Shelley's Frankenstein? Although the inventor's writings and gothic science fiction novels set at the two opposite ends of the spectrum, it's still worth noting that sci-fi literature has been alive and kicking even before Gernsback's time. But let's not get into that discussion and stick to the anti-distraction helmet topic instead.

The Isolator helmet was featured in The American Physical Society magazine in July of 1925 where Gernsback was a member of. Despite its gas mask aesthetics, the Isolator was a widely promoted idea that encourages focus and productivity during the time. The anti-distraction helmet can be an ideal solution for those who have serious concentration issues but for others who suffer from claustrophobia, the Isolator may be seen as the main prop for a horror show.