Those who suffer from an accident, a stroke or a debilitating injury typically have to face an extremely long and difficult ordeal having to make a recovery or get back to any resemblance of normal lifestyle. Going through physical therapy can be a long and hard journey and there is often no guarantee of that person making a full recovery. While there are such things as robotic exoskeletons that can provide support and help for people, they usually come with very high cost and generally need to be plugged into an electrical outlet. However students from the University of Pennsylvania have built what they say is a portable and affordable robotic arm exoskeleton.

The students are a team of mechanical engineers and over two semesters, many long hard working nights and weekends, Elizabeth Beattie, Nicholas McGill, Nick Parrotta, and Nikolay Vladimirov came up with what they have called the Titan Arm. The invention is an exoskeleton that is not only lightweight and efficient but also very powerful. The electronic muscle would be able to offer resistance when undertaking therapeutic exercises and allows the person wearing it to be able to pick up and additional 40 pounds in weight without breaking into a sweat.

Thanks to the Titan Arm having been made a lot slimmer than other robotic arms, it is easier for patients to use. To do this the team placed the actuator in a backpack instead of placing it into the actual limb of the robotic arm. Load bearing parts of the exoskeleton were milled from aluminium so as to keep the weight down as much as possible along with the amount of power used. The electronics lead, McGill, came up with a software and sensor package that can track the arm movements and the relay the data wirelessly. This means that the Titan Arm could be used by the patient at home while their therapist could monitor exercises remotely. 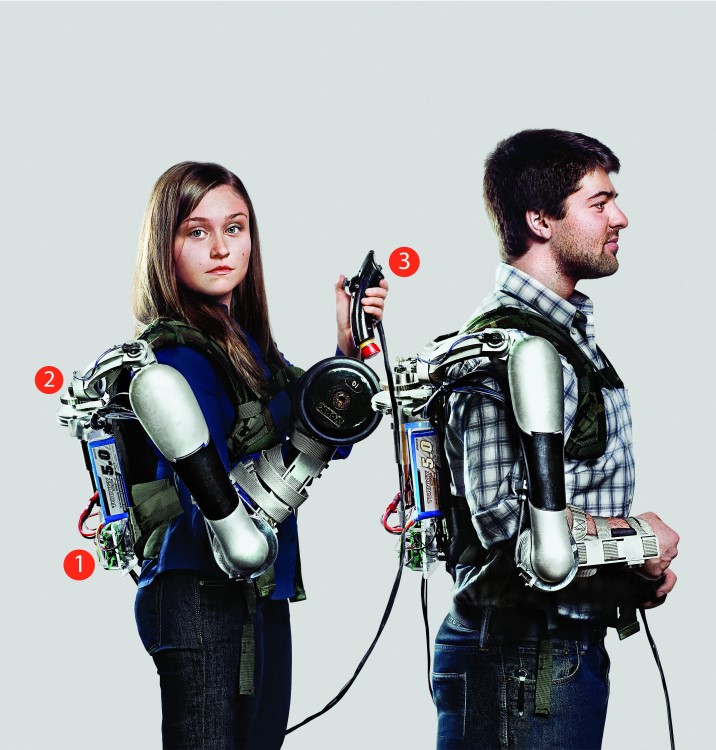 There are many potential uses for the Titan Arm and the team have already had encouragement from a snowboarder that was injured and many victims of a stroke, all of which have gone towards pushing the goal of a finished product from the $2,000 prototype. The team are now looking into designing a new prototype which is more refined. One of the designers said that they were looking into 3D printing so that they would be able to customise parts, much the same way as someone has a suit tailored to fit them.

The exoskeleton arm is powered by a Lithium-polymer battery that will offer the wearer a full day’s use. While the muscle comes courtesy of an electric motor that is stored in the backpack and which winds steel cables so that pulleys are rotated and make the arm move. A support system was also designed that would distribute the weight safely across a back plate, elbow straps and hip belt. The clever part of the robotic arm comes from software that can read the magnetic sensors positions within the steel joints and then tell the arm to move; the operator the arm is able to control this via a handheld device.