Warm up your house heating the smart way with your smartphone Marshall Cox was studying for his Pd.D. in electrical engineering when he moved into an apartment building in Manhattan that was around 90 years old. As is the case of many old buildings, Cox was to find out that the middle of winter was more akin to a hot sweltering summers day thanks to a radiator that was boiler fed and which continually sent out a great deal of heat, even on the coldest of winter nights. Cox said that he would be woken up drenched in sweat and open up the window to cool down. The only issue was that then the radiator would turn off and he would then be woken up as he was cold. However he found a way around this eventually and in the end could warm up his home with the help of a smartphone.

Cox came to realise that he could perhaps control an out-dated boiler and only store the heat that was needed for a room. With this in mind, in 2011 he started to build his own electronic radiator cover and gave it the name of Cozy. Instead of adjusting the amount of steam which went to the radiator, the device he came up with helped to improve the distribution of heat to the room. When used throughout a home Cozy is able to "persuade" boiler systems to burn less oil along with generating less pollution into the air.

The Cozy is almost like a nest thermostat for any radiator and works alongside an app for a phone or tablet which allows the owner to set the temperature and even set up and activate settings for when the owner is going on vacation. 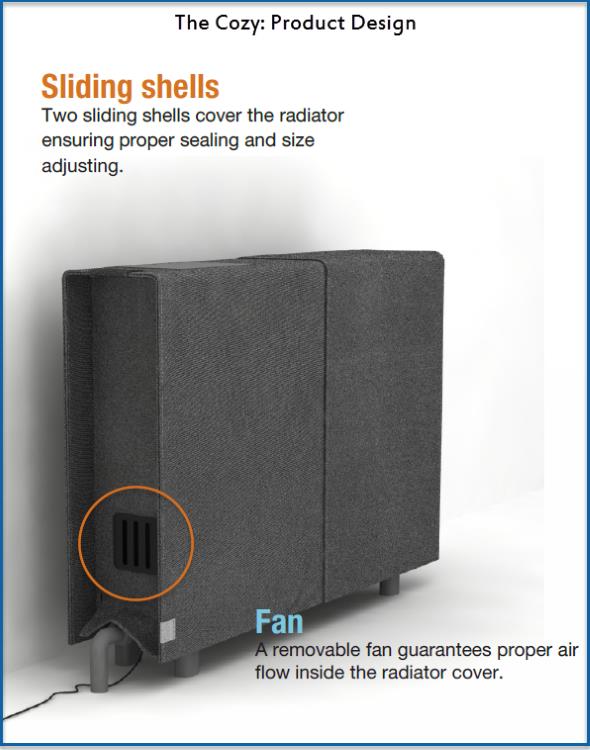 Here is how the Cozy radiator cover system works.

The boiler heats up the water into steam at 212 degrees Fahrenheit and the steam then moves from one radiator to another in the building, with the radiator that is closer to the boiler being the first to heat up and it’s the last that cools down. However the thermostat for buildings is generally set to apartments that are the furthest away, which are the coldest.
With the Cozy system all the owner has to do is place Cozy over the radiator and then plug it in. The perfect temperature can then be set and once this is done you will never again have to touch the radiator knobs or be opening and closing windows to help to try and get the correct temperature.

This graph shows the temperature over two days in the apartment of the founder of the Cozy, one is before he installed the Cozy and the other one shows the results afterwards. You can see that the ups and downs in the temperature has been caused when the boiler switches off and back on again, the circles of course indicate the typical blast of heat that arrives at 6am. Before the installation the temperature in the room was between 70 degrees Fahrenheit and 84 degrees Fahrenheit, this was a difference of 14 degrees. With the Cozy installed the variation was brought down to half of that, plus the average temperature has been much lower and more comfortable.

The Cozy radiator cover comes from lead inventor Marshall Cox at Radiator Labs, with the development of the project costing $500,000 to date.