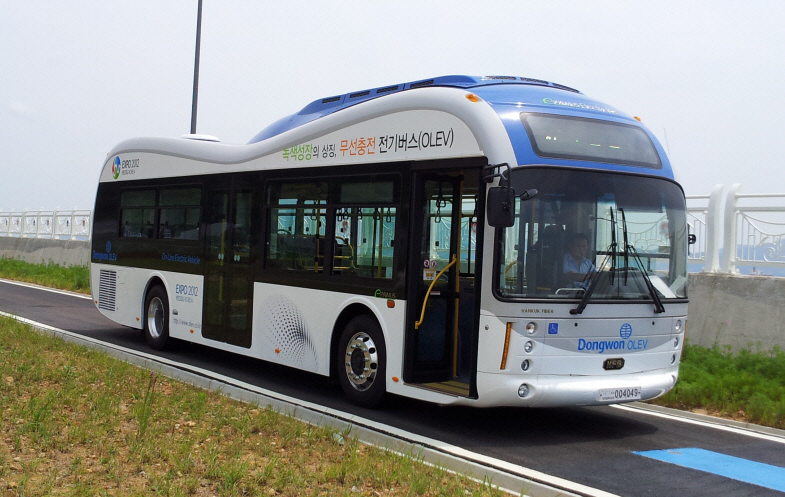 Alongside innovative battery technology, another potential method for charging electric vehicles (EVs) could be wireless energy transfer strips installed on road surfaces. The potential for new electric vehicles is quite exciting, particularly with regard to mass transit vehicles such as buses and trams, but the technology could one day be used for EVs also.

Wireless transfer was first demonstrated by Nikolai Tesla in 1891. Tesla had an obsessive interest in the subject which enabled him to develop his Tesla Coil. This device, which produces high voltage, high frequency alternating currents, enabled Tesla to transfer power over short distances without interconnecting wires via resonant inductive coupling, the near-field wireless transmission of electrical energy between two magnetically coupled coils.

This approach is increasingly being tested in various countries as a potential means of charging EVs on the move. It involves the transfer of electricity between two magnetically-charged plates, one of them buried in beneath the road or railway and the other slung beneath the chassis of a vehicle. In Italy, such a system has been in use in Genoa and Turin for over ten years, providing 10 to 15 percent of the power for 30 electric buses which recharge at each bus stop. The system was developed by a German company, Conductix-Wampfler, which claims a 95-percent energy-transfer efficiency. Another system is currently under development at Utah State University, supported by funding from the Federal Transit Administration and an induction system also launched in The Netherlands in 2010.

In 2009, the Korea Advanced Institute of Science and Technology (KAIST) tested its Online Electric Vehicle (OLEV) project. This incorporated a technology called the Shaped Magnetic Field in Resonance (SMFIR) involving the burial of electric power strips at a depth of 30 cm (11.8 inches) beneath the road surface, connected to the national grid. A trackless train was used as the demonstration vehicle, consisting of a tractor fitted with magnetic induction pick-ups and three passenger carriages. KAIST subsequently deployed trams using the system at the Seoul Grand Park Amusement Park and followed this with the world’s first electric bus in July 2013, travelling for a distance of 15 miles between the train station in the city of Gumi and the district of In-dong. By then, the initial project had already led to the formation of two spin-off companies, OLEV Korea and OLEV Boston, the latter launched in 2011 and which is aiming to commercialize its system for use in the US. 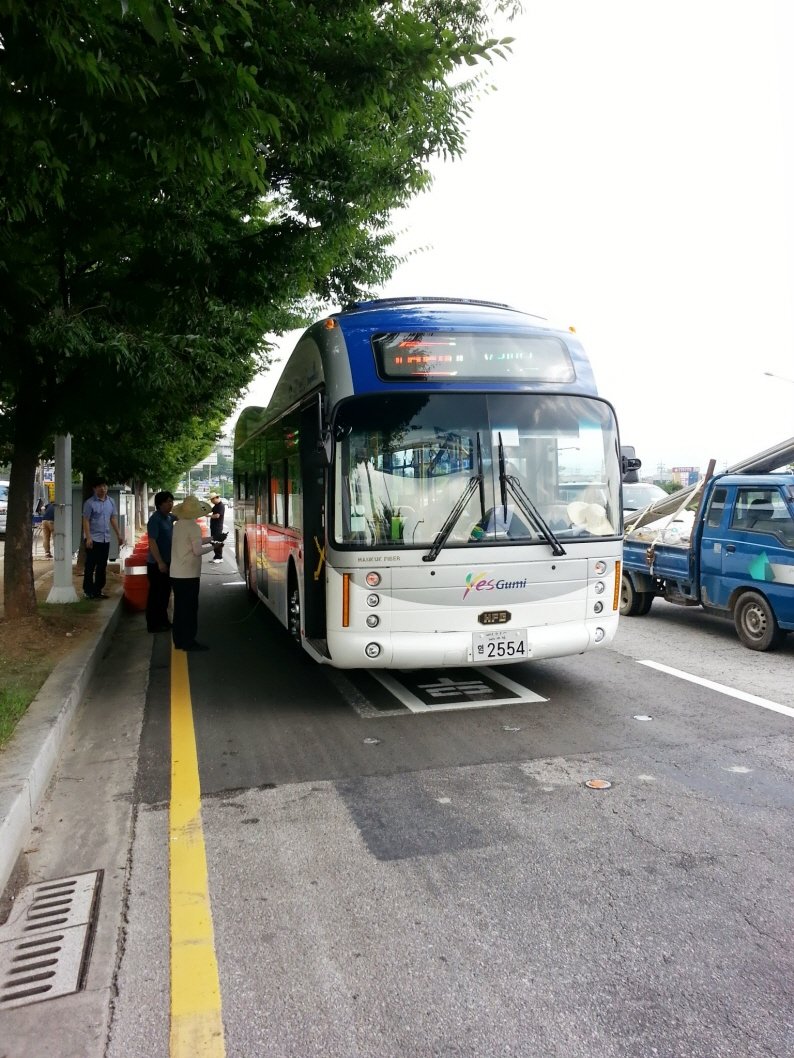 The KAIST OLEV bus in operation in the Korean city of Gumi [Image source: KAIST]

The wireless transfer system means that batteries in electric vehicles can be reduced in size to about a third of that you would normally expect to find in an electric car. A gap of 6.7 inches between the road surface and the bottom of each vehicle delivers an 85 percent charging efficiency at 100 kilowatts. The plates buried beneath the road surface account for between 5 and 10 percent of the entire route and remain switched off until a vehicle approaches. It takes about 30 minutes for OLEV to fully charge and they can travel for 40 kilometers between charges (about 24 miles) and that means they could potentially veer off the established charging route on occasion if they needed to. The buses can travel at a top speed of 85 kilometers per hour (km/h) but usually travel at 60 km/h in ordinary service.

This is actually getting quite exciting, given that other companies around the world are beginning to pick up on this. Qualcomm, Momentum Dynamics, WiTricity, Evatran and WAVE all have systems in development at the moment. Some people question whether the system could ever be refined so that it can be used in cars, simply because the equipment used on the vehicles is too bulky at 400 lbs. However, it is perfect for buses, enabling them to make considerable weight savings on batteries. Electric buses using the wireless transfer system are not currently competitive with diesel buses in terms of capital costs but they are in terms of total ownership costs because of the savings on batteries that are possible with this system as well as the low maintenance requirements.

The UK announced its intention to test ‘charge-as-you-drive’ motorways in August last year, following completion of a feasibility study commissioned by Highways England. The tests, due to take place off-road at some point either this year or next, will evaluate the potential of the system to help reduce fuel costs, incur minimum impact on road surfaces and reduce environmental impact from road transport including improvements in air quality, reduced noise and lower carbon emissions. UK Transport Minister Andrew Jones said at the time that wireless transfer could offer exciting possibilities for the country given that the government is committing £500 million over the next five years to keep the UK at the forefront of this technology and the potential to boost jobs and growth. 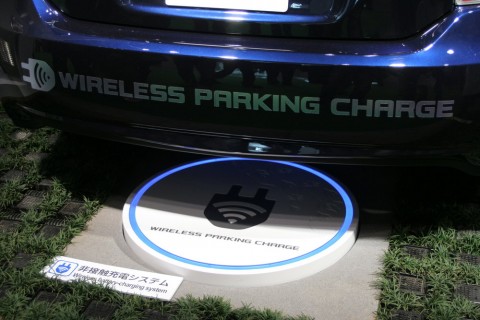 If the trials are successful, it could lead to a revolution in sustainable road travel within the UK. These tests will have a total duration of about 18 months after which more on-road trials would probably need to be conducted. In the meantime, at least one city in the UK, Milton Keynes, has already gone ahead with its own wireless transfer system, though this is fairly limited and requires buses to stop for several minutes at a time while charging.

Wireless charging in the UK is not without its critics. For example, Dr Paul Nieuwenhuis the director of Cardiff Business School's Electric Vehicle Centre of Excellence is fairly skeptical, on grounds of the cost and the fact that battery technology is improving all the time, particularly with regard to what Tesla has managed to achieve in recent years. Even if wireless charging does make it on to Britain’s roads, Highways England still intends to install plug-in charging points for EVs at 20 mile intervals on the motorway network. This in turn should help to improve the take-up of consumer electric vehicles.

One institute that is looking at the potential of wireless transfer for EVs is Germany’s Fraunhofer Institute. Researchers at Fraunhofer’s Institute for Wind Energy and Energy System Technology IWES in Kassel developed a cost-effective design in August last year, using standard components that are available on the mass market. The scientists have managed to reduce the number of bulky ferrite sheets by using coil systems, which also reduces the cost. IWES found that even when a car is 20 centimeters away from a coil embedded in the road, an efficiency level of between 93 and 95 percent is still achievable across the entire power range from 400 watts to 3.6 kilowatts. Another advantage of this system is that it can also discharge power on to the general power grid. This means that excess energy from the grid could be fed into these cars, using them as energy storage facilities until the power is required when it could be returned to the grid. 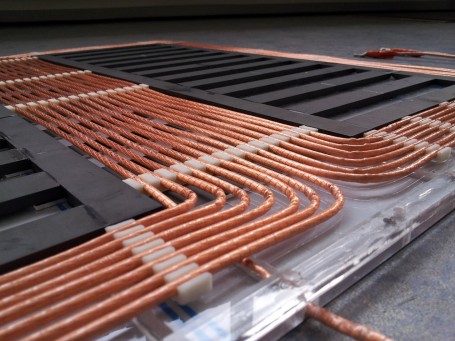 Two other Fraunhofer institutes, the Fraunhofer Institutes for Manufacturing Technology and Advanced Materials IFAM and for Transportation and Infrastructure Systems IVI, have successfully tested wireless transfer systems for use in cars, using a 25-meter-long test route with coils embedded in the road. The test vehicle, a sports car converted into an electric vehicle, managed to travel the entire route at a moderate speed while simultaneously charging its battery.