Clothing is the second largest contributor of industrial pollution. Fortunately, science has a few remedies to make sustainable clothing.

For thousands of years, clothing has been continually integrated as a normal part of most societies. In modern-day lifestyles, clothing not only offers protection from the elements but also offers a means of personal expression. Unfortunately, clothing is also the second largest contributor to industrial pollution in the world. 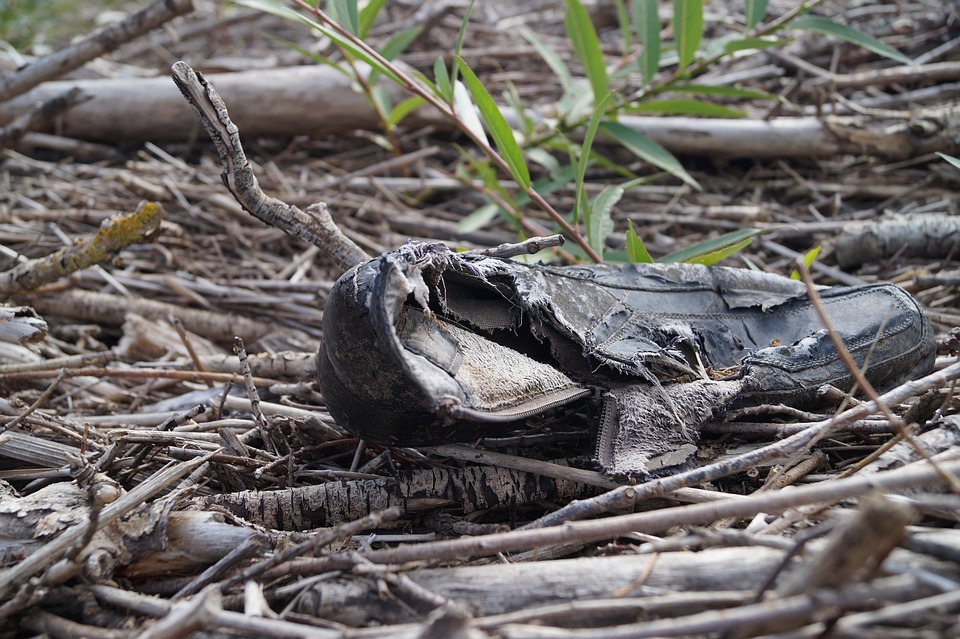 With most people around the world owning multiple articles of clothing with an increasing demand for products every year, there is a massive market for industries that can provide alternative and more sustainable clothing articles.

Over thousands of generations, humanity has refined and advanced its cloth-making techniques to produce more clothing for less money. Unfortunately, most of the processes went without much consideration into the potential environmental side effects.

The most common types of clothing are made from cotton, nylon, polyester, and wool, and all of them are severely damaging the environment.

Nylon and polyester fabrics are manufactured from petrochemicals. The materials are cheap to manufacture but have heavy tolls on the environment for a number of reasons. First and foremost, nylon and polyester are non-biodegradable. Also, the manufacturing process requires tons of energy and some lubricants which act as a source of contamination. The process also creates nitrous oxide, a greenhouse gas 310 times more potent than carbon dioxide.

Since the synthetic materials do not naturally decompose, the fibers slowly break up into microscopic fragments over many years. Small organisms mistake the colorful clothing as food, causing them to ingest large quantities. Larger predators then consume the smaller organisms, continuing the toxic consumption of synthetic materials up the food chain.

Even natural fibers like cotton take a heavy toll on the environment as well.According to Green Choices and other environmental agencies, cotton ranks as one of the most pesticide-intensive crops in the world. The pesticides leach into nearby areas, often contaminating freshwater supplies.

Almost every step in the life of a modern clothing article leaves behind a pollution footprint. From the manufacturing process to disposal, current clothing artifacts are harming the planet. Although there is no obvious solution, scientists are looking for more sustainable clothing materials.

When provoked, Hagfish unleash a plethora of tangled protein fibers contained in a small amount of mucus that readily absorbs water. The strands expand on contact with water, creating a thick slurry concoction of slime and water which increases its size almost 10 thousands times greater than its original proportion. 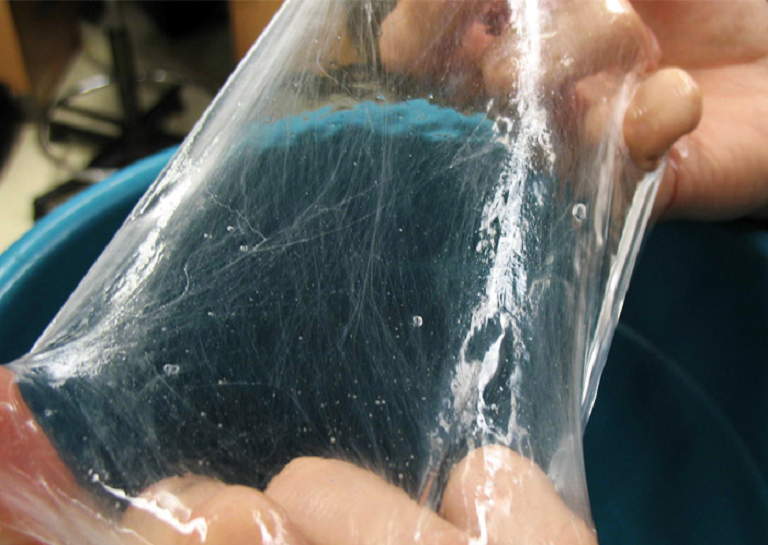 Researchers are investigating the fibers which can individually expand to nearly 30 cm in length. The strands are strong and silk-like, making them a potential alternative as a sustainable clothing material.

Scientists at the University of Guelph in Ontario are converting the slime into sustainable materials that could be used as an alternative clothing material.

Of course, the researchers do not plan or harvesting the slime from farmed Hagfish held in captivity. Instead, they plan to find an efficient means to synthetically produce the material.

Currently, some advancements have been made in genetically modifying bacteria to produce the silk-like threads, although, the technology is far from mass production.

Unsurprising to most, hemp was once extensively used as a textile fiber for thousands of years. Archaeologists have found and dated hemp cloth originating from as far back as 8,000 BC. 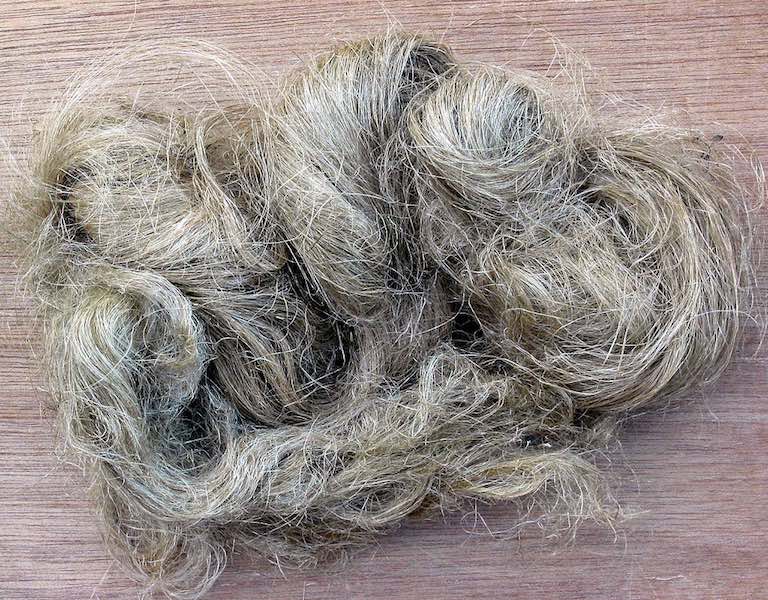 Up until the last century, hemp has been one of the most important crops for humanity. Until the 1940's, it was one of the most common crops and was often government subsidized. Unfortunately, following the second world war, the product was banned along with its THC filled counterpart, marijuana. Although hemp contains a minimal amount of THC, the ban has since remained and hemp products nearly vanished.

Cotton soon became the crop of choice in place of hemp products. Unlike hemp, harvesting cotton was relatively easy and was readily industrialized. New hemp harvesting technologies were once developed to compete with the overgrowing production of cotton, but cotton had already taken over. Not long after, petroleum products would enter the market and would seal the fate of hemp forever.

According to an MIT publication,

"In 1917 American George W. Schlichten patented a new machine for separating the [hemp] fiber from the internal woody core (‘Hurds’) reducing labour costs by a factor of 100 and increasing fiber yield significantly. Mr Schlichten and his machines disappeared, not surprisingly!"

Some hemp industries have returned, although it is far from the extensive widespread use it once saw preceding the Second World War.

Historically [hemp] had over 25,000 diverse uses ranging from paints, printing inks, varnishes, paper, Government documents, bank notes, food, textiles (the original ‘Levi’s’ jeans were made from Hemp cloth), canvas (artists canvases were used by the great masters) and building materials still remains banned in this country whose Declaration of Independence was written on hemp paper. With modern technical developments, uses have increased to composite boards, motor vehicle brake and clutch pads, plastics, fuels, bio-diesel and Eco-solid fuel. In fact anything that can be made from a hydrocarbon (fossil fuel) can be made from a carbohydrate, but the strong lobbies still manage to keep the growth of this useful crop banned and the public disillusioned," the MIT publication continues.

Hemp is one of the most readily available and viable alternatives to current clothing materials. Hemp has a proven track record in practicality and sustainability. The greatest limitation in large-scale hemp production fields and facilities remain the regulations put in place after WWII. To this day, there are very few hemp fields left.

Reintroducing the plant would be one of the easiest ways to improve the sustainability of clothing production. Although, it would likely impede on petroleum and cotton markets, a potentially disastrous problem for investors of traditional clothing manufacturing processes.

"Hemp plant is a very fast growing crop, producing high fiber yield per acre. According to few sources hemp can produce 250% more fiber than cotton and 600% more fiber than flax with the same amount of land," explains Simplifi Fabric, an environmentally friendly clothing manufacturer in the hemp business.

Hemp plants grow remarkably fast in most regions. whereas cotton will only grow in moderate climates. Hemp is also tolerant to frost and requires virtually no pesticides, a significantly more viable crop than cotton. To date, most government agencies have barred most hemp production operations. Fortunately, scientists have other alternatives that may help reduce the impact of the modern clothing market.

According to the Wall Street Journal, American dairy farmers dump more than 43 million gallons (163 million liters) of milk every year. The United States is facing a massive milk surplus that is causing extensive amounts of milk to be wasted every year.

Milk is loaded with nutrients which humans love to consume, but unfortunately, so does bacteria. While most of the bacteria are safe to consume shortly after it is pasteurized, after only a few weeks toxic cultures will consume the beverage, making the product dangerous for human consumption.

Although milk has a short best-before dateline, it can still be useful after it rots. For many years, scientists have been researching methods on how to extract the proteins within milk and convert them into the fabric.

Previous techniques involved extracting the proteins with hazardous chemicals, defeating the purpose of using milk in the first place. However, QMILK, an innovative clothing manufacturer, claims they have developed a unique technique that does not harm the environment.

The company converts sour milk into fibers that can be woven into a fabric.

QMILK fibers are 100% natural, soft and smooth as silk

The company extracts the proteins from slightly sour milk, "like a big noodle machine," according to Anke Domaske, the founder of QMILK. She continues,

"You add the protein powder – it looks like flour – to water and you mix it into a dough. Then there's a nozzle at the end with teeny tiny holes that put out textile fibres instead of noodles."

The idea seems difficult to scale, although Domaske claims there is enough spoiled milk to dress every American in a shirt spun from sour milk. Apparently, the process is relatively simple as well.

"We only need a maximum of two litres of water and an 80°C temperature [to make 1kg of textiles]. We have low waste and the process takes five minutes. Everything in the manufacture of Qmilk uses 100% natural and renewable resources," Domaske explains. 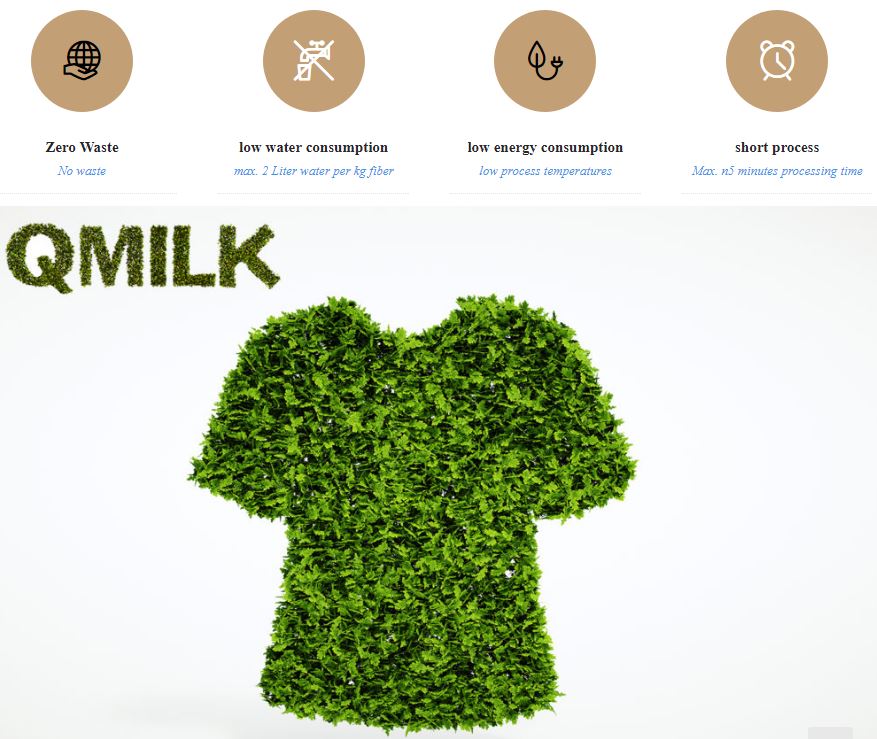 The company claim their milk fiber is flame retardant, compostable, and completely natural, all while remaining smooth as silk and providing temperature regulating properties.

The material can also resist temperatures up to 200 ° C before dismantling. Furthermore, it naturally resists dangerous bacteria like E. coli and Staphylococcus aureus. Perhaps most importantly, the material is as soft as silk - QMILK claims.

"QMILK fibers are 100% natural, soft and smooth as silk and skin friendly. They meet the requirement of innovative material developments. With a natural antibacterial effect and high hydrophilicity, they provide added value of the fiber products in the growth market. QMILK as the only natural fiber which has thermo-bonding properties. Thus, other natural fibers can also be combined without conventional plastics or phenolic resins. So, of course, light-weight constructions remain 100% and can be composted."

The company has not yet released any information regarding the cost of production. Although QMILK is still in the early days of production, it is an intriguing innovative solution that is making use of a product that is otherwise going to waste.

Dairy fiber will never be able to completely replace conventional clothing manufacturing techniques, although it could help lessen the strain of less eco-friendly options like cotton and polyester.

Clothing has remained an important part of society for thousands of years. It is likely it has now become permanently ingrained in our culture. Therefore, since clothing will always remain, it is imperative humans start taking up more environmentally practices in cloth manufacturing methods.

The solutions already exist. Now it is up to the consumer to source ethically manufactured clothes and instills the notion that polluting the Earth for the mass production of clothing is not sustainable.