Innovative Coating Could Lead to Smart Windows Becoming a Reality

A team of researchers from Australia developed a thin coating for windows that would help automatically regulate the building's temperature.

Imagine having windows that weren't just great at keeping heat or air conditioning inside a house; instead, they helped automatically regulate it. Those features could be a reality thanks to a team of researchers at RMIT University in Melbourn, Australia.

The engineers created an ultra-thin, light coating that will adhere to windows and quickly respond to heat and cold in a self-modifying manner.

The coating is a thousand times thinner than the average human hair and lets more heat into the windows when its cold and blocks the heat via blocking the sun's rays when it gets hotter outside. 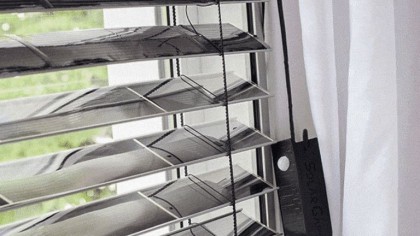 Lead researcher and RMIT associate professor Madhu Bhaskaran noted that the new coating could radically offset the traditional challenges of heating and cooling larger buildings -- namely, cut down on the extreme costs associated with the process.

"We are making it possible to manufacture smart windows that block heat during summer and retain heat inside when the weather cools," Bhaskaran said.

"We lose most of our energy in buildings through windows. This makes maintaining buildings at a certain temperature a very wasteful and unavoidable process."

Not only would this slash costs of maintaining comfortable temperatures in crowded buildings, but it could help reduce the overall energy usage for buildings struggling to 'go green.'

"Our technology will potentially cut the rising costs of air-conditioning and heating, as well as dramatically reduce the carbon footprint of buildings of all sizes," Bhaskaran continued.

"Solutions to our energy crisis do not come only from using renewables; smarter technology that eliminates energy waste is absolutely vital."

One of the biggest architectural culprits for excessive energy usage? Skyscrapers and other towering buildings.

One of the RMIT team's biggest examples (both literally and figuratively) came from the Empire State Building in New York City. The building underwent a massive project to replace all of its window panes with smart glass windows.

The Empire State Building has since announced energy savings of over $2.4 million and having a 45 percent more efficient heating plan during harsh NYC winters thanks to the glass. However, the team pointed out that their coating would've saved them both time and money.

So how exactly does the coating work?

The coating itself is made of vanadium dioxide, and when applied, the coating is just 50-150 nanometers thick.

At 67 degrees Celsius (roughly 153 Fahrenheit), vanadium dioxide transitions from being insular to being a metal.

This transforms the coating into an optoelectronic material that can be controlled and respond to light.

While the coating is clear to the human eye, it will go opaque to any infra-red solar radiation.

Co-researcher and doctoral student Mohammad Taha said that the coating's reaction to the temperature can also be affected by a switch.

"This switch is similar to a dimmer and can be used to control the level of transparency on the window and therefore the intensity of lighting in a room," Taha said. "This means users have total freedom to operate the smart windows on-demand."

Bhaskaran said the coating could be out and available for purchase as quickly as possible.

"The materials and technology are readily scalable to large area surfaces, with the underlying technology filed as a patent in Australia and the US," she said.

All of the findings can be found in the most recent issue of Scientific Reports Nature.