Innovative designs to cut down on air pollution

It has been said that each year more than seven million people die prematurely due to being exposed to air pollution. This equates to about 1 in every 8 deaths around the world during 2012, which tells us that air pollution is one of the biggest environmental risks to our heath. With this in mind, there are people in cities around the globe who are looking towards technology for a solution and here we show you some of the best designs to cut down on air pollution from around the world.

The Palazzon Italia in Milan is a building that will do its bit to reduce air pollution as a façade is going to be built which will make use of air-purifying biodynamic cement, which is said to take away pollutants from the air. Nemesi & Partners, the architectural firm are designing a shell that that has been inspired by the jungle and which is going to cover six floors, around 13,000 square meters. This is going to be launched at the in 2015 at the Milan Expo.

The Manuel Gea Gonzalez hospital in Mexico City is also being used to cut down the amount of pollutants in the air. Just last year they revealed a façade that is said to eat smog and it spreads out and covers 2,500 square meters. This works thanks to a titanium dioxide coating that when exposed to ultraviolet light, neutralizes air pollutants and breaks them down into byproducts such as water. This was the first full scale installation of the pollutant destroyer and the designers of it have said that it can negate the pollution that is caused by around 1,000 vehicles every single day. The façade has funding from the Ministry of Health in Mexico and the project is set to continue over three years at the cost of $20 billion investment to the health infrastructure of the country.

In the UK there is a huge 10 x 20 meter poster with a Simon Armitage poem printed on it, “In Praise Of Air”, and it is on the side of the University in Sheffield. Tony Ryan and colleagues made the poster and it has microscopic titanium dioxide nanoparticles in it that will take in and absorb nitrogen oxide from around 20 cars a day. The team behind the poster said that it would add on around $200 to advertising costs for a giant poster. One day they hope to see billboards made of the same material used along the highways. 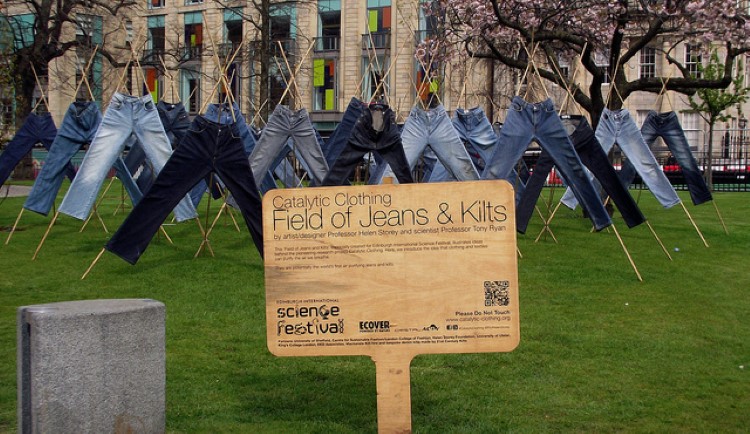 Catalytic Clothing is related to the above idea from Ryan who worked alongside designer Helen Storey. They came up with the idea of putting titanium dioxide nanoparticles in with detergent for laundry. So that it would coat clothing. Ryan said that one single person who wore an item of clothing that had been washed in nanoparticles would be able to remove around 5 or 6 grams of nitrogen dioxide out of the air every day. Two pairs of jeans washed in the particles would be able to clean up one car`s worth of nitrogen dioxide per day.

Fritz Vollrath from Oxford believes that the thinness along with the electrical charge in fibres of spider silk, along with a liquid coating that is glue like, could catch particles flying in the air. Synthesized webs could be put to use as a mesh and it could collect the pollutants. He believes that this could include pesticides, heavy metals and chemicals that come from disaster zones or chimneys.

Dyson Patent Implies the Company Will Be Creating Air-Purifying Headphones