Intel has filed a patent for a bitcoin mining hardware accelerator that could massively reduce power usage of mining.

Intel has filed a patent for a Bitcoin (BTC) mining hardware accelerator that would dramatically reduce the amount of electricity used to mine the cryptocurrency. The patent was filed on September 23, 2016.

The massive reduction in electricity consumption can be solved, according to the US tech company, by “optimizing the critical paths in the computation intensive message digest and scheduler data paths,” resulting in “extra time” that can “reduce switching capacitance or scale the supply voltage” to create a “35% combinational power improvement in the message digest logic.”

Mining bitcoin uses huge amounts of electricity in order to solve algorithms required to mine the coin. Some critics of cryptocurrency have called bitcoin mining an "environmental disaster", while others have argued that the possibility for mining to be run off renewables makes its consumption irrelevant.

No matter the source of the electricity, the financial cost of the consumption can be really high. The patent application writes that “because of the large amount of power utilized, and the relatively high cost of that power, mining Bitcoins can be a very costly endeavor. In some embodiments, the cost to mine a single Bitcoin may exceed the value of the mined Bitcoin.” Many would-be miners have been stuck in the past with large power bills with relatively low amounts of coin to show for it.

This isn’t Intel’s first investment in bitcoin and blockchain. Last year, Intel collaborated with PokitDok, a healthcare transaction service provider and software development firm to develop ways to use Blockchain technology in the healthcare industry. Intel has also announced it will partner with Chinese media and technology firm Tencent to work on an Internet of Things (IoT) Blockchain solution. 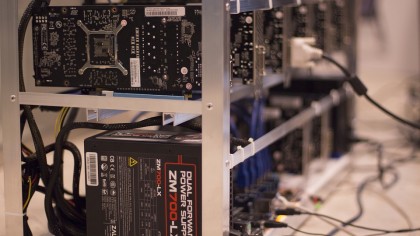 As the price of Bitcoin began to drop at the beginning of 21018, individual mining of bitcoin became quickly difficult to financially sustain due to low coin price versus high electricity costs. Intel’s invention could open up the possibility of financial success of small mining operations.

President of Velocity Micro, Randy Copeland, told media “Once this new Intel technology comes to market, ultimately more people will mine again because it’s profitable again, driving down the market value of the coins, and finding a new market balance that will again put locations with lower electricity costs back at the advantage.”

Chinese companies currently dominate the cryptocurrency mining market. The companies often operate in regional areas, taking advantage of low electricity costs. However, government regulation is seeking to shut down some companies due to environmental concerns. Intel's mining hardware accelerator could open the possibility of a change in this stance.