Drones have moved to the forefront of tech control. Though drones have existed for a while, more recently drones have become accessible to almost anyone of any age. As more and more resources are invested in drone technology companies are eager to showcase some of the latest novelty and technical uses that drones could offer. Art and drone technology came together at this year's 2018 Winter Olympics Opening ceremony, breaking the record for most unmanned aerial vehicles airborne simultaneously.

If you haven't seen @Intel's world-record breaking drone show at the #OpeningCeremony yet, you haven't lived: https://t.co/JfOuldJiF6 pic.twitter.com/RlCe6SPZEU

Tis the season. The Winter Olympics have begun, a long-awaited time period where athletes from all over the world, from countless countries, come together to compete for a gold medal and a place in history. Besides the impressive feats of athleticism, on-lookers are always excited for the alluring opening ceremony.  This year was not any different. 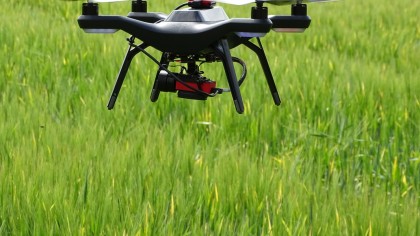 The ceremony's light show was created using drones. The record-setting performance included intel's 1,218 shooting star drones flying in sync to create a stunning Olympic-rings over the skies in Pyeongchang.

Unfortunately, the spectacle was pre-recorded, but do not worry, Intel will also be showing a 300 drone live performance during each of the medal ceremonies.

This convergence of technology and art broke records according to the Guinness Book of World Records. Previously held by Intel's high water mark of 500 drones flying together in 2016, the 1,218 drone flight will be a historic one. Each one of the drones weighed approximately eight ounces and averaged a 20-minute flight time. The drone production included some other impressive sky Olympic themes animations including a moving snowboarder. The drones were able to coordinate using a combination of precise coding and four billion color combination enabled by onboard LEDs.

Ok this drone light show during the opening ceremonies of the Olympics is definitely one of the coolest thing I've ever seen. HOW DO THEY NOT CRASH. Unreal. pic.twitter.com/ASY7imOGGp

As stated by Natalie Cheung, Intel's general manager of drone light shows, "In order to create a real and lifelike version of the snowboarder with more than 1,200 drones, our animation team used a photo of a real snowboarder in action to get the perfect outline and shape in the sky."

Animators draw up 3-D design software of the image that they want to create. Then, each of the drones gets assigned to be an "aerial pixel" of the image, creating the image in the night sky.

These drones have also created some impressive technological paintings in the past creating forms like the American flag during Lady Gaga's Superbowl performance, or even a Christmas tree at Disney's Starbright Holidays.