Interactive Billboard Coughs When Someone Smokes Nearby

With an attempt to persuade people to quit smoking, Swedish pharmacy featured an interactive billboard that sniffs around and coughs loudly.

Created by advertising agency Åkestam Holst, coughing billboard identifies smokers and react to them by coughing aggressively. The interactive billboard, featuring an annoyed handsome man, is designed for the Swedish pharmacy Apotek Hjartat. It might sound like an odd idea for an ad, but according to the company, the reactions of people have been mostly positive. As reported by the spokesman of the company;

"All smoking is a problem for people who smoke, if not now, later. Just recently Sweden introduced warning pictures on all cigarette packs. Why? Because smoking is not good for you. You can't get too many reminders about this." 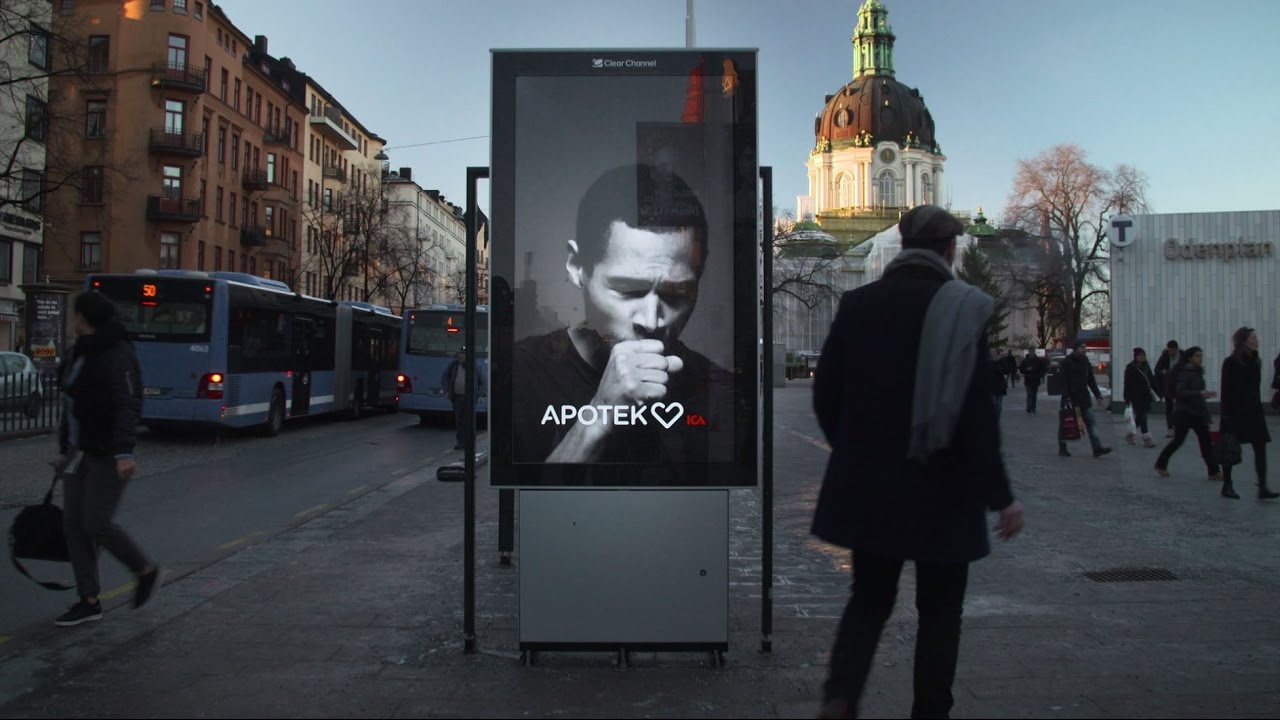 Åkestam Holst installed interactive billboards equipped with smoke detectors in public spaces such as bus stops. When the man on the billboard realizes a smoker and starts to cough loudly, it even disturbs the people around in a way. The primary purpose of the idea is to recall that smoking is bad for you and the ones around you, as well as offering various ways to break the habit and treat addiction. Surely the ad promotes smoking suppressant products such as nicotine patches, chewing gums, and pills.

Smoking is already banned in Swedish restaurants, bars, and shopping malls; the government also suggested prohibiting smoking at all outdoor public spaces such as playgrounds, bus stops, and cafes.

This is not the first interactive billboard advertising of Apotek Hjärtat. The pharmacy is also known for their Blowing in the Wind project, which was aimed to give a mind-blowing experience to the subway commuters. To demonstrate the effect of air flow caused by trains passing by, designers customized digital screens on the platform. Combined with an ultrasonic sensor, a Raspberry and a local network socket server, the ad is connected to the digital screen. Designed for the Apolosophy, the first class beauty care brand of Apotek Hjärtat's, the ad featured a woman with her hair swirling with the arrival of trains.

Watch the video of the ad that went viral and spread in over 190 countries.
Surely the Apotek Hjärtat is not the first one who used interactive billboard techniques. The leading chocolate brand KitKat came up with a campaign named "Have a Break" featured on interactive billboards as well. The brand placed touch sensitive billboards that vibrate when people lean against them, providing a quick, stress-reducing massage. By physically contacting the customers, Kitkat took interactive advertising to a next level. In many different ways, be it vibrating or coughing or just standing still, billboards are still one of the best ways of advertising.

During the launch of the new Xbox Tomb Raider game, McCann London devised a new use for the traditional billboard by turning it into a reality show. Named as "The Survival Billboard",  the billboard allows the gamers standing before it to take part in an endurance test and face the harsh weather conditions controlled by the people via live stream.

Watch the campaign that drew thousands of viewers within 22 hours.

Well, thanks to the imagination of designers and engineers; it seems like the interactive billboard technology will spread across the world. And who knows, maybe it will even influence new media artists to install their works in public spaces as well.