Among his many other accomplishments, Carl Friedrich Gauss contributed greatly to the important branch of mathematics called number theory.

Number theory is a branch of mathematics devoted to the study of integers, the so-called counting numbers. Number theory got its start with the ancient Babylonians.

A Babylonian tablet dating to 1,800 BC contains a list of Pythagorean triples. As anyone who has ever solved for the sides of a right triangle knows, these are numbers where a2 + b2 = c2, an example being,
32 + 42 = 52

SEE ALSO: WEIRD AND ENCHANTING FACTS ABOUT THE NUMBER 23

The ancient Greeks noticed a great many things about integers, for example, multiply an odd number by an even number, and the answer is always even. Then, things went dark for number theory, quite literally, as in "the dark ages."

It wasn't until French mathematician Pierre de Fermat (1607 - 1665) that number theory got a boost. Maddeningly, Fermat never published his work, and everything we know about it comes from his correspondence with other mathematicians, and in the notes he scribbled in book margins.

Swiss mathematician, Leonhard Euler (1707 - 1783) came next, but it wasn't until the German Carl Friedrich Gauss (1777 - 1855) that number theory really got underway. There are mathematicians, and then there is Karl Friedrich Guass.

A Great Story About Gauss

There is a story about him: as a young student in Germany, he was misbehaving in class. As punishment, his teacher set him the task of adding the numbers 1 to 100, and thought that he would be at it for a while. Instead, Gauss bounced out of his seat in minutes with the answer: 5,050.

Often referred to as the Princeps mathematicorum, Latin for foremost of mathematicians, Gauss was born in Germany in 1777, and as a young child was a calculating prodigy. As just a teenager, Gauss constructed a regular polygon having 17 sides, called a heptadecagon, by straight edge and compass alone. This was the first major breakthrough in polygon construction in over 2,000 years. 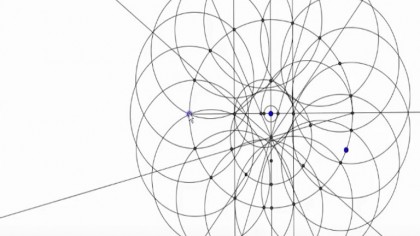 How to Create a Regular Heptadecagon using Math!

This demonstrated an analysis of the factorization of polynomial equations. Gauss was so enamored of this shape, that he requested it be put on his gravestone.

In 1797, Gauss's doctoral thesis was a proof of the fundamental theorem of algebra which states that every polynomial equation with real or complex coefficients has as many roots as its degree. The root is where the polynomial is equal to zero. Let's look at an example:
x2 - 9 = 0, adding 9 to both sides,
x2 = 9, taking the square root of both sides
x = plus and minus 3, which are the roots.

We use modulo 60 arithmetic every day when we tell time on a clock. Every hour on a clock is modulo 60 because it is divisible by 60 minutes.

Gauss also contributed to the understanding of the prime number theorem which gives an approximate value for the number of primes less than or equal to any given positive real number, x, π(x). A prime number is a whole number greater than 1, whose only factors are 1 and itself. A factor is a whole numbers that can be divided evenly into another number.

Contributions to Astronomy and Statistics

In 1800, the Italian astronomer Giuseppe Piazzi had discovered the dwarf planet Ceres, but it soon vanished behind the Sun before sufficient observations had been taken to calculate its orbit, and where it would reappear. Many astronomers submitted their ideas of where Ceres would reappear, but one idea differed dramatically from the rest – Gauss's.

When Ceres reappeared on December 7, 1801, it was almost exactly where Gauss had predicted it would be. To find Ceres, Gauss had invented the method of least squares. This method finds the line of best fit for a set of data, where each point of data is representative of the relationship between a known independent variable and an unknown dependent variable. Today, the method of least squares is used extensively in the financial industry.

After that, Gauss worked for many years as an astronomer, and he published a major work on the computation of orbits. Between 1818 and 1832, the Duke of Hanover set Gauss the task of surveying the territory of Hanover. That surveying led Gauss to formulate a new concept of the curvature of surfaces, and this was the first murmurings of the branch of mathematics called topology.

During the 1830s, Gauss became interested in magnetism and participated in the first worldwide survey of the Earth's magnetic field. To do that, he invented the magnetometer. Towards the end of his life, Gauss came to doubt that Euclidian geometry was complete, and he thought that there must exist an alternate geometric description of space. But, Gauss failed to publish his ideas, and this left the door open to the Hungarian Janos Bolyai and the Russian Nikolay Lobachevsky. Following Gauss's death in 1855, many new ideas were found among his unpublished papers, and it was left to Bernhard Riemann to complete the overthrow of Euclidian Geometry.