Interesting Stephen Hawking Theories and Facts That Made Him Famous

Let’s remember the greatest mind in the field of modern science, theoretical physics and cosmology.

It's 14th March, the day when the legendary Stephen Hawking left for the heavenly abode. He died at the age of 76 after suffering from a long time disease called amyotrophic lateral sclerosis (ALS) that left him paralyzed for decades.

Today, let’s discuss about this renowned and inspirational British scientist who is best known for his work on explaining the origins of the universe and black holes.

Who Was Stephen Hawking and What Was He Known for?

Born on January 8, 1942, Stephen Hawking was a popular British figure - a theoretical physicist who has made significant contributions in various fields including cosmology, quantum gravity, and general relativity.

The author of several popular science books, including 'A Brief History of Time', Hawking worked on the groundbreaking theorems regarding singularities within the framework of general relativity. Not only this, but he has also made some theoretical predictions regarding the black holes emitting the radiations.

He clearly knew his goal which was having a complete understanding of the universe and getting the answers to the questions like why it is as it is and why it exists at all.

If you are fascinated by science and have the same inquisitiveness of finding the facts of the universe, do not miss reading some of the famous Stephen Hawking theories. But, before we dive deeper into his life, his discoveries and his achievements, let's have an overview of his life.

Stephen Hawking's IQ was not hidden from the world. The British scientist, professor as well as an author was bright, but not an exceptional student.

He always focused on learning outside the school. This can very well be known from the example when he, along with his friends used recycled parts to construct a computer for solving rudimentary mathematical equations.

He wanted to study mathematics, but unfortunately, Oxford didn't offer a degree in that specialty.  This made him choose physics and to be precise, cosmology.

He went to Cambridge University after graduating from Oxford to pursue further studies in cosmology.

Where a normal IQ level range is anywhere between 85 and 115, Stephen Hawking's IQ was 160. But, when he was asked about the same in a 2004 interview with The New York Times, his reply was: "I have no idea. People who boast about their IQ are losers."

His intelligence quotient needs no proof as his work and discoveries speak about the same. Let's take a look at them.

What are Stephen Hawking's Significant Discoveries?

So, in a nutshell, Stephen Hawking theories led to important discoveries including:

He did path-breaking work on singularities and applied it for the whole universe and also told that gravitation produces singularities.

Together with Brandon Carter and James Bardeen, he discovered the laws of black hole mechanics:

Hawking was one of the first to calculate quantum fluctuations i.e. small variations in the distribution of matter. This showed that during inflation, it might give rise to the spread of galaxies in the universe.

You can find the range of subjects like the Big Bang, black holes, light cones, etc. covered in his book. The book was a success and appeared on the best-seller list of British Sunday Times.

This theory states that the universe consisted of a superposition of many initial conditions rather than one unique initial state.

Apart from this, he also wrote many informative books like - The Universe in a Nutshell (2001) and God Created the Integers: The Mathematical Breakthroughs That Changed History (2005).

His achievements will always be acknowledged by the world, but another interesting aspect about him that surprised the world was his survival story - the incurable disease he was diagnosed with that actually takes the life within 2-3 years.

Stephen Hawking was diagnosed with ALS - an incurable neurological disease. This disease leads to the progressive deterioration as well as the death of the nerve cells which control voluntary muscle movements like breathing, walking, talking and chewing. 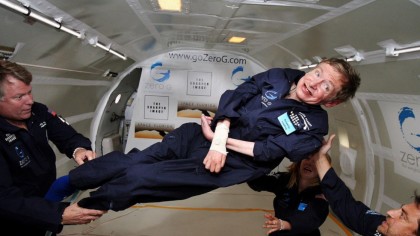 Though the average life expectancy after the diagnosis of ALS is about 3 years, it may vary from person to person where around 20% live five years after their diagnosis, 10% live 10 years and 5% live 20 years or more.

Life expectancy depends on the motor neurons running the diaphragm - the breathing muscles. This makes respiratory failure the most common reason for death.

The other thing is the deterioration of swallowing muscles - leading to malnutrition and dehydration.  So, if the patient is not suffering from these two, chances of living longer than expected increases.

In the case of Stephen Hawking, it was just astounding to see him survive for this long. He was certainly an exception.

He finally breathed his last on 14th March 2018 but his contribution to the world will make him live forever. From Stephen Hawking's IQ to theories, he made an irreplaceable place for himself in this world. His departure was not only a setback for the scientific community but also for the ones who were connected with physics and cosmology.

The Mandela Effect: The Science Behind Collective False Memories

9 of the World's Most Influential Early Astronomers