If you're wondering what all the hype is about Tesla's latest Model 3 EV then learning about its interior may give you some idea on why it's such a big hit in the realm of electric and autonomous vehicles. The new Tesla Model 3's commendable features don't just exist within its interior, the EV's exterior also boasts world-class safety design. For an affordable, mass-market EV, Model 3 is considerably high-end in terms of its interior and exterior ergonomic design.

A look inside Model 3 pic.twitter.com/hIhAZn4Sdj

Model 3 is both minimalistic and animal-friendly

During the handover party, Musk emphasized how he and his Tesla team intricately focused on the interior details of the new EV.

"We agonized over every curve, over every detail, every corner, every element of the interior...including things that people probably won't even notice. We care about every part of it".

One of the most striking characteristics of the Model 3's interior is that it simply doesn't have an instrument panel. No gauges, speedometers, dials nor any clusters of buttons for functions. Instead, a 15-inch interface touch screen replaces these conventional car features where all the EV's information and stats are displayed. 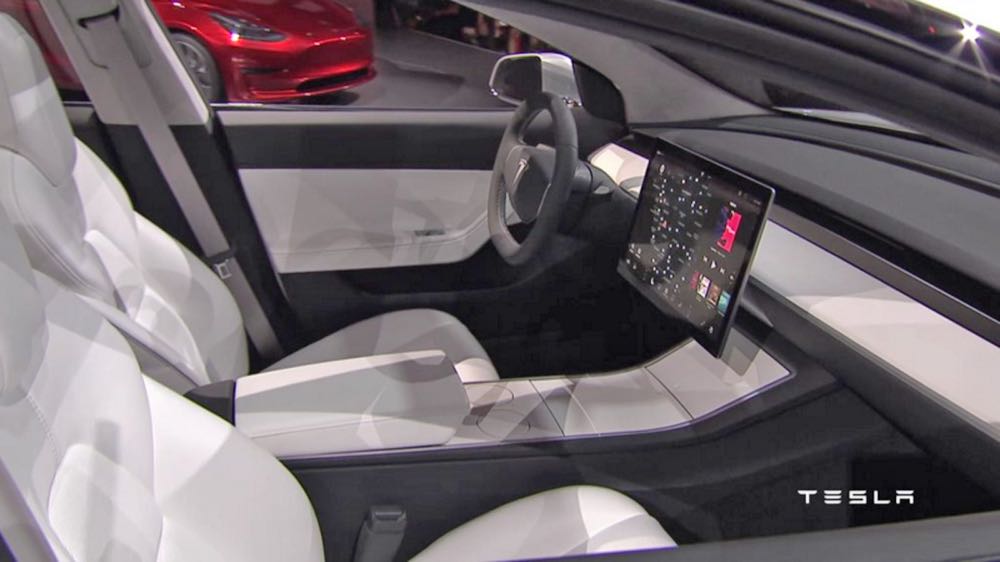 "We aim for something that was a very simple, clean design because I think in the future the cars will be increasingly autonomous so you won't really need to look at an instrument panel all that often".

Model 3 is minimalistic and spacious, and that's the most attractive thing about it. It's more of a relaxing space where you can meditate as it's free of all the bustling interior function features typically found in conventional cars. And Tesla's chief designer, Franz von Holzhausen, was right when he described the Model 3 as an unprecedented vehicle in terms of its simple and ergonomic design.

"It doesn’t look like anything out there. It feels advanced, but not scary, and it will age gracefully".

Perhaps one of the most notable interior decisions Tesla made for their latest Model 3 is that the inside of the EV will be encased using "vegan" materials instead of leather. Although not every single element inside a Model 3, or any Tesla EV for that matter, will be wrapped in vegan materials. Some interior features like the steering wheel will still be made using animal-based leather.

It's not just the Model 3's interior that is commendable at this point. The sturdiness of the new EV is also difficult to ignore. A comparison video tweeted by Tesla demonstrates the performance of their latest EV against a Volvo S60 car during an impact testing. This impressive testing result proves that the Tesla Model 3 is such an outstanding EV despite being in the "affordable" range.

"Safety may not be sexy, but it is truly what matters most. If there was anything more we could do to keep you safe, we would do it in a heartbeat", said Elon Musk himself.

However, this comparison is not an attempt to discredit Volvo's safety features. In fact, Musk lauded the Swedish automaker for manufacturing the safest vehicles in the world after Tesla, of course.

"Want to emphasize that Volvo is a great company and makes arguably the safest line of cars in the world after Tesla. We picked the comparison video because it was one of the best. Most cars are much worse".

Musk envisions a future where vehicles will be fully autonomous, which would allow the driver and passengers to essentially do anything they want inside an operating EV. He highlighted, in his Model 3 handover speech, that all of the Tesla EVs are equipped with the necessary hardware for full autonomy.