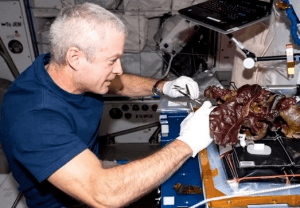 Since the successful Apollo missions to the moon, NASA has been interested in going to the next frontier, Mars. One of the needs for any mission to space with personnel is food, and with Mars being so far away, the amount of food would be much greater. NASA is closer to a mission to Mars or any other far away destination with the confirmation of food grown in space to be eaten.

Food has been grown on the International Space Station (ISS), since the early 2000's but has not been cleared to be eaten until recently. This is because of  the unusual environment the food is grown in. A few concerns for the food include the quality of the air the plants are exposed to and the high levels of radiation in space that may cause mutations in the plants themselves.

NASA says this will also influence agricultural work on earth. Places that could be affected include Dubai which has a harsh environment and a larger demand for food is leading to the possibility of growing plants either in buildings or underground. Other technologies to be used with this include grow lights which use incandescent lamps, florescent lamps, high pressure sodium bulbs or metal halide bulbs. All of these grow lights supply the high energy electro-magnetic waves similar to sun rays and make photosynthesis possible.

The first plant eaten was red romaine lettuce. Astronauts Scott Kelly, Kjell Lindgren and Kimiya Yui first sanitized the leaves before topping with extra virgin olive oil and balsamic vinegar. Kelly noted that the lettuce tasted "kind of like arugula." Lindgen was very impressed with the results exclaiming "That's awesome," after taking the first bite of the leaf. NASA is exploring the possibilities of growing other menu options in space and also plans to study how pollen travels in zero gravity.