The National Transportation Safety Board and Tesla are both still investigating what caused a Model S unit to catch fire in June.

Months of confusion about a Tesla Model S mysteriously catching on fire hasn't cleared up yet. However, the NTSB released a preliminary report that laid the foundation for further investigation.

Tesla also released its own statement about the incident, calling it an "extraordinarily unusual occurrence."

Summary of the original incident

In June 2018, actress Mary McCormack reported the incident via her Twitter. She said the issue happened to her husband's Model S.

According to McCormack, her husband only stopped after another pair of drivers flagged him down and made him aware of the smoke.

@Tesla This is what happened to my husband and his car today. No accident,out of the blue, in traffic on Santa Monica Blvd. Thank you to the kind couple who flagged him down and told him to pull over. And thank god my three little girls weren’t in the car with him pic.twitter.com/O4tPs5ftVo

Shortly after the incident, the National Transportation Safety Board started their investigation into the fire. The NTSB just filed their report, which is effectively preliminary findings that lay the groundwork for further investigations.

Here's a summary of everything that happened:

“On Friday, June 15, 2018, about 5:30 p.m., Pacific daylight time, a 2014 Tesla Model S electric‑powered passenger car, occupied by a 44-year-old male driver, was traveling westbound on Santa Monica Boulevard, in West Hollywood, Los Angeles County, California. Motorists flagged down the Tesla driver because they saw smoke coming from the vehicle. The driver stopped the Tesla next to the north-side curb in the 7800 block of Santa Monica Boulevard and exited the vehicle. A nearby Los Angeles Police Department patrol car also stopped, and the officers directed traffic around the burning car. The Los Angeles County Fire Department responded to the vehicle fire, dispatching an engine unit from station #8, which is located at 7643 Santa Monica Boulevard. The fire was extinguished, and there were no injuries. The vehicle was towed from the scene without incident.”

The NTSB report only established the firm facts about the fire. It has yet to diagnose reasons behind the fire. It also hasn't said any

Immediately following the incident, Tesla ensured car owners that their vehicles are 10 times less likely to catch on fire than their gas-powered competitors.

Just prior to the NTSB report, Tesla issued their own statement regarding internal investigations into the fire:

"This was an extraordinarily unusual occurrence, and we are continuing to investigate this incident to find out what happened. Our initial investigation shows that our battery architecture was extremely effective in containing the fire to a single module within the battery, without affecting any other modules. We also know that for this same reason, the cabin was totally unaffected by the fire, and our customer had more than four minutes to exit the vehicle before any flames appeared. We’re glad our customer is safe." 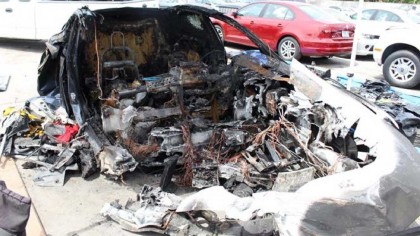 This is not the first time a Tesla vehicle has caught fire. In 2016, a Tesla Model S had flames coming out of it during a test drive in France. No one was injured in that event. Tesla determined that fire was caused to an improperly connected electrical system that was tightened by humans rather than the company's automated system.

Interesting Engineering will continue following this story and report the latest updates.