Optical illusions lay at the heart of mankind. They have the capacity to wow and blow our minds, challenging our fragile perception of reality. Some of the most recent optical illusions have "broken the internet" causing a flurry of confused Twitter users and astonished Facebookers. If you enjoy the occasional optical illusion, well today you are in luck.

A Japanese researcher recently discovered a new type of optical illusion that is making its rounds across the internet. The illusion called curvate blindness literally bends our perception of reality. Check out the image above.

Can you see what is happening? Are you confused? Or maybe you missed it? When you look at the image, you see two types of lines, lines that curve and lines that zig zag. However, that is wrong. The lines throughout the image are all the same. They are all curved, the introduction of the grey background causes the lines to zig-zag.

Optical illusions date all the way back to the 5th century B.C.

The ancient Greeks were intrigued by perception and what may trigger someone to see something that was not there. Greek philosopher, Epicharmus was the first to tackle this question. He hypothesized that our "sensory organs" are responsible for our reality deception. As it was part of the times, other philosophers came out of the woodwork with counterarguments. Some argued that it is not us that is distorting reality but rather the other way around and that the environment we perceive is deceiving us. To make things more confusing, Aristotle threw his hat in the ring and stated that both arguments were correct. This debate carried on for centuries. Though we are far better versed on the topic now, the point remains that even back then, optical illusions were baffling great thinkers and scientists. 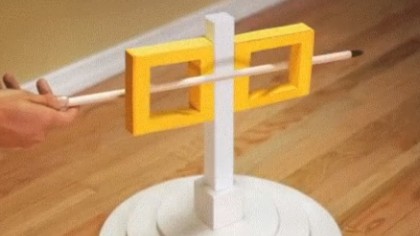 Top 10 of the Most Insane Optical Illusions

Illusions can be broken down into three types literal, physiological, cognitive. According to Seeker, "in literal illusions, such as the current image, the ambiguity is due to our brain’s pattern recognition ability and tendency to fill in details and make educated assumptions when it's not sure what it's looking at. In this case, the brain sees bends as angles when it’s not sure what to make of them."

Optical illusions showcase that our reality and perception can be two very different things. Basically, illusions manifest themselves when the brain is unable to comprehend what you are viewing. This study further reiterates how there is still so much to learn about the way people perceive things.

Do you have a favorite optical illusion?