Is Mark Jacobson’s Plan to Use 100% Renewable Energy Feasible?

A review on one of the most debatable renewable energy studies of our times.

Mark Jacobson is a renewable energy expert and a professor at Stanford University in the department of civil & environmental engineering. He is also the director of the Energy Program at the university.

In 2009, Jacobson and Mark A. Delucchi published a paper in Scientific American addressing the issues related to the transition to a 100% water, wind, solar, clean world. Since then this idea has been a topic of discussion and criticism.

Jacobson is an individual who has understood the demand for renewable energy and aims to bring 100% clean energy sources as alternatives to presently used fossil fuels.

His first paper discussed how 50 states in the U.S could transform into 100% clean energy-dependent states by 2050 and eliminate the use of biofuels, nuclear output, and fossil fuels.

In the following papers, he and his co-workers extended the idea to 139 different countries by creating clean energy roadmaps for them.

Can the World Completely Rely Upon 100% Renewable Energy?

The increase in pollution and global warming alone is enough for us to run behind clean, renewable energy, which is water, wind and solar. There is a need for the world to be dependent on clean energy alternatives to fossil fuels.

His study proposes that, if the plan is successfully implemented, about 37.1 percent of energy can be acquired from wind, 67.6 percent from solar and the rest of the world’s energy from geothermal, hydroelectric, tidal and wave combined.

Jacobson and his team have been criticized by many including the PNAS stating that his idea is far from being practical and Jacobson has managed to suppress all the critiques so far with an on-time response with facts.

One of the criticisms helped Jacobson and his team to bring a new paper which stated that the 139 countries can be broken down to 20 regions and the most appropriate energy storage resolution individually suited to those regions can be implemented.

This new idea will help to find out the stability of the grid every 30 seconds in 5 years, in each region. Does it mean that the idea of running our world on 100% renewable energy is possible?

Technically, yes! It is possible to rely on renewable energy completely, but it comes with a great level of risk and demands a significant amount of efforts from each one of us.

Every nation must understand the need for such clean energy sources and join hands to work together towards our sustainable future.

The Challenges of Switching to 100% Clean Energy Sources

Switching to 100% clean energy sources as an alternative to fossil fuels and natural gas is a giant move and will have its own challenges and consequences. One of the greatest challenges we face is our own unwillingness to adopt the change.

Shifting to 100% clean energy sources will require adopting solutions that many of us would resist. To make this possible, it is important to bring awareness within people all around about the benefits and future possibilities of such a change.

Another mammoth challenge lies in the deployment of the technologies that make use of renewable energy across different parts of the world.

For the plan to be effective, a major structural and political change is required across countries, cities, and businesses hoping to attain a sustainable future.

It is also important to bring together a pool of innovators and entrepreneurs, and give them access to the right resources and markets, so that commercialization of sustainable solutions can be made possible.

Governments must also realize the need and benefits of such a transition and must be willing to bear the costs associated with it, which can be mitigated only in the long run.

The impact caused by the utilization of these sources depends upon the type of technology used to harvest renewable energy. Let’s look at the three major renewable energy types and its impact on the environment.

The sun provides a tremendous amount of solar energy. Solar energy is a clean and renewable resource which can be utilized widely to provide electricity to different regions of the world. Many parts of the world are utilizing solar energy for electricity, but the scale is still too small.

Even though solar energy is a form of clean energy, harvesting this energy can cause some impacts on the environment including, land loss, water loss, habitat loss, use of hazardous materials in solar thermal plants and photovoltaic cells, etc.

Wind power is one of the cleanest ways to generate electricity with no discharge of global warming agents and pollutants. But the setting up of windmills does have some impact on the environment.

The large area of land being utilized, birds getting affected due to the varying pressure caused by the rotors and the annoying noise caused by the running of blades and turbine are some of the impacts.

To utilize hydroelectric energy, large dams are built in different regions of the world, or small river plants are set up.  It is one of the cleanest resources and does not cause any pollution to water or the environment.

However, the impacts discussed here are much lower compared to the damage caused by the utilization of fossil fuels.

Why Is The Transition to Renewable Energy Sources Important?

Even though transitioning to a 100% renewable energy world will have its own impacts and may require lot many hurdles to jump over, the shift is of utmost importance and is poised to bring benefits to people in the long run.

The utilization of fossil fuels has been causing many problems including global warming, increased pollution levels, ozone layer depletion, damage to public health, wildlife and natural habitat and much more. 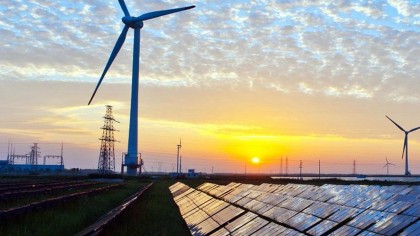 What is required, however, is the commitment from each one of us to make every possible effort in the direction of making our world clean and better through the adoption of sustainable solutions.

If the adoption rate continues to grow, Mark’s plan to transition to 100% renewable energy world might not be too far.