Is the Bell Nexus the Future of Air Travel?

Bell is hoping to shape the future of air travel with its air taxi, the Bell Nexus.

Bell Helicopter unveiled their design for a full-scale air taxi, the Bell Nexus, at CES 2019, bringing us one step closer to the future of flying cars that humans have been looking forward to for almost 100 years.

The problem of urban traffic congestion is an old one and CES 2019 is full of companies trying to solve it. From shuttles to smart cities, the future of mobility is one of the biggest themes of CES 2019, but Bell Helicopter is taking their solution to traffic congestion vertical.

Just as architects in the early 20th century addressed the problem of land scarcity by building the first skyscrapers, Bell Helicopter believes that the solution to road congestion is to leave the road behind and take to the air.

“As space at the ground level becomes limited, we must solve transportation challenges in the vertical dimension,” says Mitch Snyder, President, and CEO of Bell Helicopter, “And that’s where Bell’s on-demand mobility vision takes hold.”

Bell’s solution is the Bell Nexus, a full-scale vertical-takeoff-and-landing (VTOL) vehicle that Bell hopes will be deployed in cities around the world.

The Nexus uses a hybrid-electric propulsion system, utilizing six tilting, ducted fans to provide the required lift, the same kind of design that the company has made a signature in its other vehicles.

The Nexus is part of a larger collaborative effort with other familiar names in the industry, which they call Team Nexus. Bell will lead the overall design and development, as well as the production, of the Nexus VTOL systems.

Safran will contribute its hybrid propulsion and drive system to the project and EPS is providing the Nexus with an energy storage system.

The Future of Air Travel? 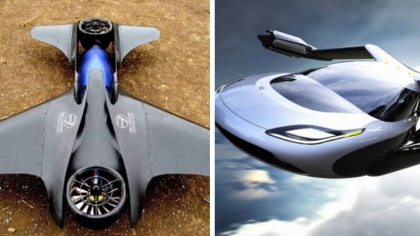 According to Bell, the ‘Nexus’ name was chosen to represent the nexus of transportation technology that they’ve pioneered for 80 years and the convenience and comfort expected in urban transportation.

Finding a way to combine the unique logistics of air taxi services, especially in urban environments, and the safety of the passengers and those around the vehicle is a significant challenge, but Bell believes it's up to the task; they were part of the effort that put men on the moon and brought them back to Earth safely, after all.

Others also believe in Bell's vision. Uber has expressed serious interest in helping Bell bring the Nexus to market for use in their transportation ecosystem, giving Bell a unique opportunity to build up the market for short trip air travel.

“The industry has anticipated the reveal of our air taxi for some time, so Bell is very proud of this moment,” Snyder said. “We believe the design, taken with our strategic approach to build this infrastructure, will lead to the successful deployment of the Bell Nexus to the world.”

Whether the Bell Nexus is going to be the vehicle fills the space that helicopters and airplanes don’t—and in an affordable and accessible way for the masses—remains to be seen. But if their unveiling of the Bell Nexus at CES 2019 is any indication, Bell is doing everything it can to make it happen.

This Spring-Loaded Screw Is the Future of Soundproofing