Is The Sand a Solid, Liquid or Gas?

With new research data, we are one step closer to figuring out the flow of granular materials.

It is amazing that granular materials are used extensively around the world, to be more precise, their use is ranked second to water, yet we don’t know much about it. Think of all the granular materials that surround us and those we use on a day to day basis.

The sand and gravel on the earth to the flour we use for cooking are prime examples of granular materials. But even though we use them on a large scale basis, we really don’t understand when it comes to the way this material move.

Let us take sand, for example. Sand reacts like a solid when you stand on it, and it is more than capable of supporting your weight. Now, if you were to put the same sand particles in an hourglass, these will start flowing through the hole like a liquid.

Spread the same particles in the air and the individual particles will behave like a gas. So what is it? How do we categorize granular particles?

According to Ken Kamrin, an associate professor of mechanical engineering at MIT, sand is all of the above.

“I think if we want to develop a better understanding of granular media, we have to think about it as broadly as possible and come up with models that treat it like a solid, liquid, or gas,” Ken said.

Since granular materials show properties of both solid and gas, it is hard to determine how these particles will react or flow under various conditions. Having a reference model will help us to know how sand will respond to different conditions and this data can indefinitely be applied to various manufacturing processes.

If the data is readily available, Pharmaceuticals and other production houses who deal with granular material on a daily basis will be able to construct machines and pipes that will not cause blocks or uneven flow.

The new model devised by Kamrin is more accurate and reliable than existing models. His new model is able to predict the flow more accurately because he factored in something that is very crucial in deciding the nature of flow – the size of the particles.

His new model was then put up against the conventional flow, and the results were a near perfect match.

"The basic equations governing water flow have been known for over a century," said Kamrin. "There hasn't been something similar for sand, where I can give you a cupful of sand, and tell you which equations will be necessary to predict how it will squish around if I squeeze the cup." 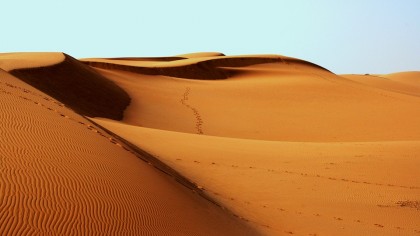 Earth Is Starting to Run Out of Sand

Kamrin states that the flow of water can be easily predicted because the water particles are always within certain tolerances. But with the flow of sand, some particles may be quite large and can cause “bleed over” into the neighboring flow layer.

In such cases, "There's more chatter between neighbors," Kamrin said. "It's like the basic mechanical properties of a cube of grains become influenced by the movement of neighboring cubes."