Is The TV Era Coming to An End As AR Develops?

TV might be everyone’s favorite, but AR is slowly taking over.

People have been obsessed with television for ages. Right from its invention through all these years, television has grabbed the attention of people from all age groups.

TV was able to take the viewers into entirely another world showing various aspects which they otherwise could not have seen and experienced in their lifetime.

The programs that we saw on TV left us in awe, making us laugh, shed a tear, and even at times, made us think like we never did before! Since the technology had a drastic growth in the last few years, people started trying the latest inventions and with the growth of technology, their interests, and entertainment choices also changed.

We are now at a point where we are ready to transcend television for something more immersive, something that is capable to make us believe that we are in the show itself!

There are many debates going on about the future of television, technology changes and how can it impact the present scenario. Many people predict that the era of television will soon see its end.

So from the survey, it was clear that the priority of watching television had decreased a lot and shortly televisions might even cease to exist.

The entertainment sector has been overflowing with innovative and helpful products like wearable mobile devices, AR, VR, etc. These devices are becoming a threat to the conventional TV and the fact that people no longer find time to sit in front of the television, be it a traditional one or a smart one, add to it.

One major advancement in technology in the audio-visual is the Augmented Reality(AR). It allows the viewers to immerse themselves into a virtual environment and get a real life like experience. This is way more lively, fun and thrilling experience that what TV could offer.

There are a variety of products which use the AR platform to give the viewers an exciting interactive experience. The application of Augmented Reality has been growing in many areas.

From gaming to enterprise applications, there are many more possibilities that will come fruition as innovators and business entities continue to realize the potential of AR.

What is Augmented Reality?

Many see AR as an entertainment suite used in games and photo filters. However, AR has a significant potential across multiple industrial applications including education, healthcare, marketing and more.

Now for the real question - can AR replace the existing entertainment systems of the future? Will its development have impacts on other products?

The popularity of Augmented Reality

Although it will be too early to predict the impact of AR on television, Augmented Reality will definitely have an impact on the future of media trends. Companies like Microsoft, Google, and Apple have made big investments in AR development.

Apple has plans to bring numerous augmented reality apps to smartphones with the iOS 13 update. Thus the users will get more chances of interaction with the real-world environment.

However, AR technology can still be considered in its infancy. Apart from its implementation through mobile apps, the adoption of this technology in the retail market is still slow.

This is specifically due to the cost. For example, Microsoft HoloLens, a fully self-contained holographic computer and a gold standard for AR headsets, retails at over $3,500, making it ideal for enterprise-only applications.

However, things are changing now. New entrants in the market have come up with low-cost AR glasses and plenty of startups have also started getting into the space.

MagicLeap is one such American startup that has gained a lot of traction with the introduction of its MagicLeap One AR glasses. The company raised $1.4 billion from multiple investors including Google and China’s Alibaba Group.

Research indicates that augmented reality will generate $120 billion in revenue for retailers by 2020. With the development of Apple’s ARKit, Google’s ARCore, and Snapchat Lens Studio the door to the future of AR is wide open. 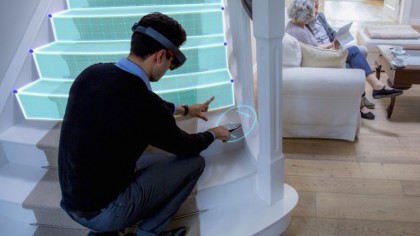 Augmented Reality will also play a significant role in the future of gaming, education and healthcare industries. It will also have a profound impact on social media.

Experts claim that by 2025 the AR industry will be worth about $25 billion. With giants like Facebook, Apple, and Microsoft investing heavily into this technology, the future of AR looks indeed promising.

However, it would be too early to predict the impact this technology will have on television. The cost of AR technology and its infant state can nowhere match the reach that television has currently.

Augmented Reality will do have a major impact on the way people will consume content. This will definitely create a possibility of AR to co-exist as the technology matures in the future.

But imagining a world where physical and virtual realities have merged, the picture might not be that pleasant. The video below hints at what our new world might look like if that really happens.