To address the growing problem of overcrowded cemeteries, Israel built sky high vertical burial towers, now they are focusing below the earth.

A “city of the dead” is being built beneath Jerusalem’s main cemetery Har Hamenuchot in response to a critical lack of burial space in Israel. The catacombs will house 22,000 graves in kilometer long tunnels that have been excavated over the last two years; the ossuary project is slated to cost nearly $50 million upon completion.

"We came up with this idea to provide a solution under the cemetery with burial structures, but also hidden from the eye," said Arik Glazer, chief executive of Rolzur Tunneling, the company in charge of the excavations to the New York Times. ”There is not enough land, and we take advantage of this.”

Overcrowding of cemeteries worldwide is a growing problem, especially within cultures such as Judaism which prohibit cremation. Therefore, Israel has come up with novel ways to ensure a resting place for their dead, despite meager land resources. One idea was to construct cemetery towers to make room in full burial sites like Yarkon Cemetery which is considered the flagship site for the project. 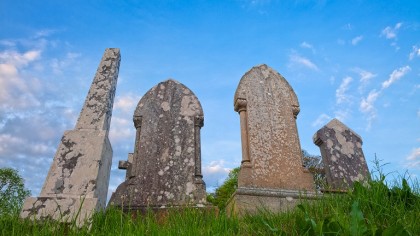 Now, the underground cemetery is the next endeavor to take on the crisis, and much like the cemetery towers is on its way to rabbinic approval. According to the New York Times, a few rabbis have even visited the site of the tunnels so far.

"Everyone really appreciated it," he said, saying it revived a practice that was popular centuries ago. "Burials like this existed in ancient times, 1,600 to 2,000 years ago, and we have we have revived this tradition because of the lack of burial space," said Glazer to NYT.

In fact, the entire enterprise is being paid for by Chevra Kadisha, a Jewish burial society.

The concept is the first of its kind in the modern world and has since been nominated for an award by the International Tunneling and Underground Space Association. They got runner-up in the "Innovative Underground Space Concept of the Year” section.

This underground city will be completed in 2018 and can be accessed by a 50-meter (55-yard) elevator shaft.

Burying the dead in a tunneled, underground lair is a very ancient idea, they have been prevalent in the Middle East region for thousands of years and can be found dotted throughout Europe as well. Probably the most famous catacombs in the world are in Paris.

Built in the 18th century, these tombs are open to the public, and in some areas, bones are stacked into art pieces adding a creepy touch to an eerie scene.