The Chinese government's recent contract agreement with Israel could be the start of a global shift toward meats grown in labs. This could reduce emissions caused by current practices, but will it catch on?

China's most recent tech trade agreement is far what one would expect; the world power signed an agreement with Israel worth $300 million to start importing lab-grown meat products.

Israel is becoming one of the pioneering developers for lab-grown meats. Three Israeli companies -- SuperMeat, Future Meat Technologies, and Meat the Future (ha) -- will start shipping their product roughly 6,300 km to Chinese markets. The Israel Innovation Authority and Israel Export Institute helped broker the deal. Both groups also attended the first-ever lab-made meat conference in May.

China currently imports roughly $10 billion in meats each year. Comparatively, $300 million seems like a deal when juxtaposed with the cost of feeding the country's roughly 1.4 billion residents. The Chinese government also created a plan to encourage less meat consumption, hoping to see a 50 percent drop in the next several years.

Lab meat, as the name implies, is meat cultivated in laboratory settings. It's also called cultured or bio meats elsewhere around the world, but the meaning is still the same. Researchers use animal cells as a form of cellular agriculture. Some researchers have compared it to regenerative tissue engineering. However, the process is upscaled considerably to provide for a mass market.

As of late, Israel seems to be the only country truly delivering on its promises of lab-grown meats. The United States, despite having Silicon Valley startups dedicated to the cause, doesn't seem to produce anything more than hype surrounding the food. Most recently, Memphis Meats produced cultured meatballs for sale. However, nothing has taken off. It could be that other countries are struggling similarly to the U.S.: regulated approval of lab meats and how to get it to sound more palatable. Countries are also still struggling with how to maintain low costs for production.

Global meat consumption drains a lot of resources globally. Livestock contributes roughly 15 percent of man-made greenhouse gas emissions according to the United Nations. That's 7.1 Gigatonnes of CO2 each year. Higher demands for cattle (meaning both beef and milk products) make up 65 percent of the overall livestock emissions. Cattle emit a lot of methane, and they remain the most popular type of meat consumed globally. Livestock consumption is also estimated to increase by 4 percent per person within the next decade. 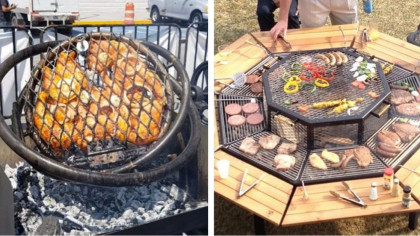 9 of the Most Interesting Grills You'll Ever See

One of the most efficient ways to reduce this emission despite an increased need for meat? Reduce the number of animals for consumption, and growing meats in a lab setting certainly does just that.

"Through this kind of lifestyle change, it is expected that the livestock industry will transform and carbon emissions will be reduced," said Li Junfeng, director general of China’s National Center on Climate Change Strategy and International Cooperation.

Want to learn more about the nuances of lab meats? Check out Mark Post's speech to the World Economic Forum in October 2015 below. Post serves as professor of physiology at the University of Maastricht, and he makes several interesting predictions about the future of the meat industry.