IT Energy Efficiency: Single-Atom Transistor in Gel Electrolyte Reaches the Limit of Miniaturization

High-energy consumption is a well known side effect that comes from digitization. Information Technology (IT) has a share of more than 10 percent in total power consumption. Transistors are at the core of digital data processing in computing centers as well as in consumer electronics such as personal computers, smartphones, or even in embedded systems from household appliances to airplanes. 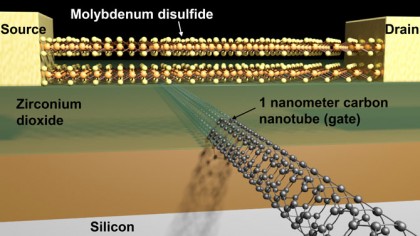 The imperative need of improving energy efficiency in IT

High-performance computing have had their sights set on Exascale computers, which are supercomputers capable of performing 1 million trillion floating-point operations per second, or 1 exaflops, to be up and running by 2020. The major problem faced by those working on Exascale supercomputers is the amount of energy power they consume.

Until recently, in accordance with Moore’s Law, engineers had only hoped that operating voltages for silicon transistors would continue to fall along with transistor sizes. “We could theoretically lower the operating voltage from where it is now—about 800 millivolts—to a few millivolts,” said Eli Yablonovitch, a computer engineer and director of the National Science Foundation’s Center for Energy Efficient Electronics Science at the University of California, Berkeley in 2015. He expected that a “millivolt switch” could be a radical solution to supercomputing’s energy efficiency problem. Fast-forward to 2018.

Single-Atom Transistor: Perspectives for quantum electronics on the atomic-scale

This quantum electronics component developed by Professor Schimmel's team has the capacity to switch electrical current by controlled repositioning of a single atom. Working at room temperature and consuming a minimum amount of energy, this milestone in energy efficiency brings new opportunities to Information Technology (IT).

According to the Abstract, the single-atom transistor represents a quantum electronic device that works at room temperature. This allows the switch of an electric current by the controlled and reversible relocation of one single atom within a metallic quantum point contact.

In the research paper, Quasi-Solid-State Single-Atom Transistors, published in Advanced Materials, the researchers explain that the atomic switch is entirely controlled by an independent third gate electrode which allows to open and close a metallic contact between the source and drain electrodes by the gate-voltage-controlled relocation of one single silver atom. The device operates by applying a small voltage to a control electrode or gate within the aqueous electrolyte.

The development of the single-atom transistor developed by KIT's researchers represents a world's first demonstration of the functionality of a transistor on the atomic scale. This innovation may considerably enhance energy efficiency in information technology. According to Professor Schimmel, "this quantum electronics element enables switching energies smaller than those of conventional silicon technologies by a factor of 10,000."

The nanoscale transistor switches electrical current through the controlled reversible movement of a single atom. In contrast, conventional transistors switch current by locally changing electronic properties. The single-atom transistor works at both extremely low temperatures near absolutely zero (-273ºC) and at room temperature, representing a big advantage for future applications.

These transistors represent quantum switches, the levels between which the switching occurs being given fundamental laws of quantum mechanics. This all-metal transistor does not use any semiconductor, the lack of a band gap allows operation at very low voltages.

The single-atom transistors possess extremely non-linear current-voltage characteristics which is desirable in many applications. According to the researchers, these transistors can be manufactured using conventional, abundant, inexpensive, and non-toxic materials with great benefits for the electronics supply chain.

At the same time, they open perspectives for electronic switching at ultrafast frequencies. In their report, the researchers say that because the switching process is achieved with very small gate potentials in the millivolt range, the power consumption of such devices is by orders of magnitude lower than that of conventional semiconductor-based electronics.

The future of quantum electronics

Ultra-low power consumption in the future development of nanoscale electronic circuits depends on the electronic conductivity on the quantum level. The single-atom transistor developed by Professor Thomas Schimmel and his team opens instriguing and utterly fascinating perspectives for the emerging fields of quantum electronics and logics on the atomic scale.

California Will Require Solar Panels on New Buildings and Renovations