An illness led researchers to identify three families with mitochondrial DNA inherited from fathers, dismissing the notion that the genetic material can only come from mothers.

Mitochondrial DNA, the DNA located in that converts chemical energy from food into a form that cells can use, has long been known to be passed down exclusively from mothers to their children. Since it is transmitted through the female egg, it was also established that sons could, of course, never pass along their mothers' mitochondrial DNA to their own children.

This matriarchal inheritance of the mitochondrial DNA was one of those well-accepted and unquestioned biological facts, until now. A mysterious illness reported by a patient in Cincinnati, United States has led to a new discovery about the genetic material that will question all we have come to accept as fact.

It all began when a four-year-old was referred to physician-scientist Taosheng Huang at the Cincinnati Children’s Hospital Medical Center. The infant was experiencing unexplained fatigue and muscle pain and it had been suggested he may be showing signs of a mitochondrial disorder. 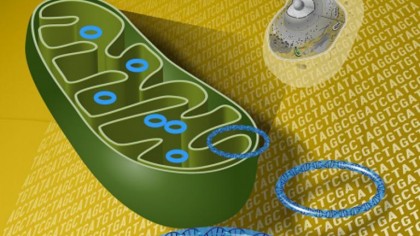 Puzzled by this discovery, he proceeded further down the genetic tree and went on to analyze the mitochondrial DNA of the patient's close and extended family. Huang sequenced genetic material from the boy's sisters, parents, grandparents, and even from both his parents and grandparents' siblings.

As expected, he found that the young patient's DNA came from his mother who shared the same high level of heteroplasmy. However, what was unexpected was that several of his family members, his mother, grandfather, and two of his great aunts, were revealed to have inherited mitochondrial DNA from both parents.

Perplexed by this find, Huang decided to see if these genetic circumstances could also exist in other gene pools. The scientist reached out to labs seeking families also exhibiting high levels of heteroplasmy in their mitochondrial DNA.

Two more such families were identified and the Baylor College of Medicine was then enlisted to sequence the three families’ mitochondrial DNA. Their results confirmed what Huang suspected.

An impossible yet real event

Although it has now become clear that mitochondrial DNA can now, even if rarely, be passed down from fathers, the question as to how is still extremely unclear. Eggs destroy sperms' mitochondria after fertilization making it nearly impossible for a father's genetic material to make it into the egg.

And yet here it is in three families! For now, the researchers have proposed that a potential mutation could turn off an egg's mitochondrion elimination abilities allowing the transfer to take place.

And although the rareness of the cases makes the study and the transfer an exception to the rule, the find does offer hope that whatever mechanism allows this rare transfer to take place could someday be used to treat diseases or thwart their inheritance.

For now, we can just be mesmerized by the fact that even after all these years, nature can always throw us a curve ball. The new paper is published in the Proceedings of the National Academies of Sciences.