Jadav Payeng: The Man Who Planted an Entire Forest by Himself

Jadav Payeng, known as the Forest Man of India, spent 30 years of his life planting trees to save his island, creating a forest and restoring wildlife in it.

Jadav Payeng is better known as the Forest Man of India. He earned this name by spending 30 years of his life planting trees, creating a real man-made forest of 550 hectares. Thanks to this reforestation, wildlife has returned to the area. Incredibly, he did it all by himself. This is his story.

The Mulai Reserve is a forest on the Majuli Island in the Brahmaputra River near Kokilamukh in the Jorhat district in Assam, India. It has a total area of about 1,000 hectares and is under continuous threat due to the extensive soil erosion on its banks.

Majuli has shrunk over the past 70 years by more than half. There are concerns that it could be submerged within the next 20 years. To fight this, in 1980, the Assam Forestry Division of Golaghat district began a plan to reforest 200 hectares of the forest in one of the sandbars of the Brahmaputra river.

However, the program was sadly abandoned in 1983. After that, the forest was single-handedly attended by Jadav Payeng during the course of over 30 years. He began planting bamboo. Then, he continued planting other species. He wants to spread his Molai Forest to Bongoan of Majuli. 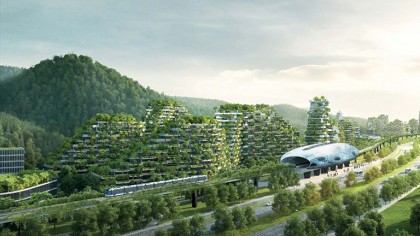 He planted and tended trees along a sandbar on the Majuli island. Majuli is the biggest river island in the world. The Molai forest now encompasses an area of about 1,360 acres/550 hectares of forest. The area can be compared to the size of 15 football stadiums together.

The Molai forest created by Jadav Payeng is largest than Central Park in New York City. Thanks to him, the Molai forest now houses Bengal tigers, Indian rhinoceros, reptiles, over 100 deers, and rabbits in addition to monkeys and several varieties of birds, including a large number of vultures.

The government only learned about Jadav's forest in 2008 when a herd of around 100 wild elephants strayed into it. Since then, they are regular visitors to the forest every year. They generally stay in the forest for around six months. The elephants have given birth to 10 calves in the forest.

In his honor, the Molai forest was named after Padma Shri Jadav "Molai" Payeng, the Indian environmental activist and forestry worker who tries to save the island where he lives by planting one tree every day.

The Molai forest and Jadav Payeng have been the subject of a number of award-winning documentary films. In 2012, a locally made documentary film produced by Jitu Kalita, The Molai Forest, was screened at the Jawaharlal Nehru University.

Jitu Kalita, who lives near Jadav Payeng's house, has also been featured and given recognition on his work reporting the life and accomplishment of Jadav Payeng through his documentary film.

Jadav Payeng is an inspirational environmental activist. He upgraded a chapori of the river Brahmaputra to a reserve forest all by himself. He began his incredible journey in 1979 when he was only 16 years old.

Jadav Payeng is a humble farmer from a marginalized tribal community in the region of Assam, India. He is the son of a poor buffalo trader. When he started planting trees in 1979 as a teenager, it was because he had seen dead snakes piled on the sand.

The snakes had died due to the high temperatures and the lack of shade or tree cover. Since he started, he invested over 30 years of his life to make a difference in the world trying to save Majuli from erosion by planting thousands of trees for almost 40 years.

Which country has the largest man-made forest in the world?

China already has the largest human-made forest in the world. The forest is known as the Great Green Wall. This man-made forest has been designed to stop desertification and fight climate change. This Chinese forest is meant to eventually cover more than 42 percent of China’s landmass.

Ordinary citizens have planted billions of trees across China since 2010,  making the Chinese forestation programme greater than any seen elsewhere. However, this is the effort of an entire population toward a common goal. The forestation of the Molai Forest is the result of the effort of one man only. This is what makes it unique.

Jadav and the Tree Place

Jadav's story is so powerful and inspiring that there is a book for children telling how he made the forest all by himself as home to wild animals and to try to save his island. Jadav and the Tree Place written and illustrated by Vinayak Varma was translated into different languages; the book is available on Storyweaver.

It was recently announced on Jadav's Facebook page, where he promotes tree planting, that Jadav Payeng, the Forest Man of India has made it to the textbooks of Maharashtra School Board.

According to Earth Day Organization, deforestation is the second cause of global warming. It produces about 24 percent of global greenhouse gas emissions.

Around 350 million people live close to or within forests around the world. A total of 1.6 billion people rely on forests for their livelihood. Specially indigenous communities are dependant on forests. Forests provide a total of around US$ 75–100 billion per year in goods and services.

According to the International Union of Concerned Scientists, forests are home to 80 percent of the world’s terrestrial biodiversity. Preserving their environment is paramount for all species, including humans.

Combatting deforestation by all means has been regarded as one of the most promising and cost-effective ways to lower carbon emissions. Forest restoration potentially translates into over one-third of the total climate change mitigation required globally by 2030. Scientists have issued a deadline of 2035 to act on climate change or else we will pass a point of no return.

The global effort aims to restore 150 million hectares of the world’s deforested and degraded lands by 2020 reaching 350 million hectares by 2030. This would capture about a sixth of the carbon necessary to close the emissions gap.

Imagine how fast the global goal to fight climate change could advance if only there were more Jadav Payengs in the world. Anyone can make a difference planting one tree at a time. Those interested in planting trees to help the environment can contact the following organizations:

"I am only one, but I am one. I cannot do everything, but I can do something and I will not let what I cannot do interfere with what I can do." -Edward Everett Hale