Jaguar and Bremont have combined their talents in celebration of Jaguar revealing continuation of the lightweight E-Type sports car. They revealed it at the Pebble Beach Concours D`Elegance and this was the chosen venue to announce the E-Type wristwatch too. The watch is a limited edition of six commemorative watches that is made available to those who buy the Jaguar replica racers. 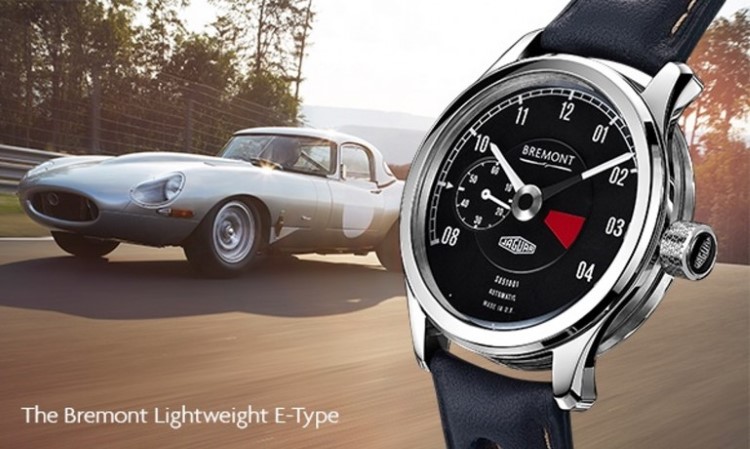 The lightweight E-Types are built by Jaguar Heritage and they are the final 6 out of the 18 run limited editions that began in 1963. They were however suspended 50 years ago with just 12 of them having being completed. The company is celebrating the catch-up and got together with Bremont to make 6 watches that go with the 6 cars and not just this, the watches contain materials from the production line of the cars.

The partnership between Jaguar and Bremont began life when the watchmaker made the clock that is found in the XJ75 Platinum and the C-X75 concept cars. The 43mm wristwatch has been based around the archives of Jaguar and reflects the tachometer seen in the E-Type vehicle, along with detailing such as that found on the font numeral which was on the original rev counters.

Just as with the original gauge, the watch features a dial that is black with the famous “red zone” quadrant along with the hour and minute hands being chamfered like the gauge needle. At the six o clock spot Bremont have stamped the chassis number that corresponds with the 6 continuation lightweight E-Type Jaguars.

The central bands of the cases have been designed in aluminium which comes from the scraps that were produced when making the body panels of the cars. On the inside of the limited edition watches is the first ever self-winding movement of Bremont, this comes with a power reserve of 50 hours along with an alloy rotor that contains real wood on the trim which copies the Jaguars steering wheel.

The winding crown of the watch comes with the same pattern as that found on the Dunlop tires of that period and the strap of the watch is designed in the Conolly leather that is found on the E-Types trim. To finish things off you can see the engine number of the car that corresponds with the watch on the reverse, which is sapphire crystal.

"The Lightweight E-type project is so special that we thought we really needed to create something which complemented the cars and, since most classic enthusiasts also tend to be horophiles, a wristwatch seemed to be the answer," says Jaguar’s director of design, Ian Callum.