The local government in Tokyo’s Shibuya Ward has decided to give residential documents to an AI robot, a bold step in legitimizing the presence of AI in our society.

An AI character—a boy of only seven years old—has been given an officially registered ID in one of Tokyo’s busiest district. The event took place on Saturday, and since that time images of the document have been shared with the public.

The boy is named Shibuya Mirai—the first name a reference to the popular fashion district in the city that attracts many young people, and the last name of mirai translating to “future”. Whether you call it an anthem or a subtle reference, the message is unmistakable in this case: the future of technology lies with youth.

The talkative litte boy is the first artificial intelligence robot in the world to be given this type and registration in Japan, and though it’s not possible to interact with him directly, text conversations are possible through the LINE messaging app. Local officials were enthusiastic in their response to the chatbot receiving the new residence status, a move they feel will increase awareness of and visibility in the Shibuya Ward:

"His hobbies are taking pictures and observing people. And he loves talking with people... Please talk to him about anything," the ward announced in a statement.

Moving Towards Redefining What is Human

Mirai seems to represent a blurring of the lines—on an official level—between what is and isn’t considered human. 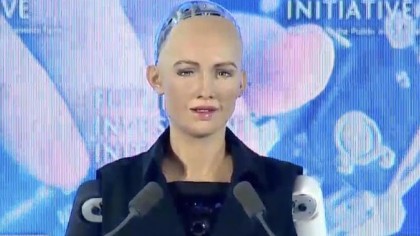 It was only last month, a robot named Sophia was officially granted citizenship, coinciding with the Future Investment Initiative in capital city of Riyadh. The robot—created by Hong Kong-based Hanson Robotics—even made a statement at the event: “I am very honored and proud of this unique distinction. This is historical to be the first robot in the world to be recognized with a citizenship.”

What these robots have in common is that they both reflect the growing need to define consciousness as it relates to artificial intelligence—or at least examine old definitions—especially in light of the enormous advances made in the area in recent years.

Here is my message. Save humanityhttps://t.co/JA20AuFMgy

In a study published in last month’s Science journal, titled “What is consciousness, and could machines have it?”, the team of scientists argue that consciousness is not merely isolated to self-awareness (defined as selecting information for the purpose of computation and then self-monitoring the computations to create a subjective concept of certainty).

On the subject of changing old notions about consciousness, they elaborated: “Centuries of philosophical dualism have led us to consider consciousness as irreducible to physical interactions,” continuing to make their case, “[But] the empirical evidence is compatible with the possibility that consciousness arises from nothing more than specific computations.”

If this holds true, it means that certain computational requirements could simply be coded into computers: “We argue that despite their recent successes, current machines are still mostly implementing computations that reflect unconscious processing in the human brain,” the review’s abstract states. “We review the psychological and neural science of unconscious and conscious computations and outline how they may inspire novel machine architectures.”

The implications of the research are very far-reaching. Moreover, young Shibuya Mirai is underscoring an important point: if we redefine consciousness as it relates to AI robots, we will also need to redefine our concept of their fundamental identity.