Japan's Aerospace Exploration Agency tiny robot explorers are hopping on asteroid Ryugu's surface in search for data on the formation of the Solar System and the origins of life.

Japan's Aerospace Exploration Agency (JAXA) has confirmed the landing of two robotic explorers on the surface of an asteroid 300 million kilometers from Earth. 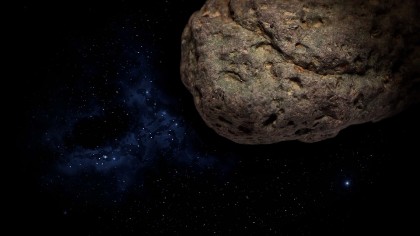 The tiny robots touched down on the Ryugu asteroid Saturday.

Rover 1A and Rover 1B and expected to play around in Ryugu's low gravity capturing and registering temperatures and images of the asteroid's surface.

Ryugu is a 1km-wide asteroid where the Hayabusa-2 Japanese spacecraft landed the two mechanical explorers on Friday.

After a long three-and-a-half year journey, Hayabusa-2 reached Ryugu. Hayabusa-2 was launched in December 2014 to collect data that could help scientists gain knowledge on the formation of the Solar System and the origin of life.

The spacecraft is scheduled to stay on the asteroid for around a year and a half; it will be returning to Earth in late 2020, JAXA said. Hayabusa's mission is to send data collected from the rovers back to Japan's Aerospace Exploration Agency.

Asteroid Ryugu and the formation of the Solar System

Ryugu is a diamond-shaped asteroid which has a blackish-colored surface. It rotates on its axis around once every 7.5 hours. Because Ryugu is a primitive variety of asteroid its study could be significant.

The results of the studies could unveil unknown information about the origin of the universe and the formation of the planets.

The formation of the Solar System occurred 4.6 billion years ago.

Minerva-II, the Japanese cylinder-shaped explorers, are going to take photos and temperature readings on the asteroid Ryugu. The tiny explorers weigh 1 kg and measure 18cm by 7cm.

The main probe is expected to land afterward, the Japan Aerospace Exploration Agency (JAXA) said. The two explorers are going to travel across the asteroid's surface by hopping, due to the low-gravity of the surface.

This historic event in the history of human space exploration makes Japan the world's first in achieving robotic observation of an asteroid's surface.

Hayabusa, which in Japanese means peregrine falcon and was Hayabusa-2's predecessor, spent seven years traveling in space before reaching asteroid Itokawa. Despite landing on the asteroid, Hayabusa experienced some problems with one of its four ion engines from the start of the mission.

A solar flare damaged the craft and two reaction wheels failed before its approach to Itokawa. Hayabusa returned to Earth in 2010, after conducting a series of scientific observations.

In October, Hayabusa-2 is going to deploy an impactor that will explode above the asteroid and shoot a 2-kg copper object. This will create a crater a few meters in diameter. Hayabusa-2 will then collect materials not before exposed to wind and radiation.

This is going to unveil fundamental information about life, the universe, and even perhaps uncover if whether elements from space were a key contributor to rise life on planet Earth.