Driven by the necessity of developing a long-range device, Japan decided on a low-tech solution - Balloon bombs.

Pearl Harbor still sits as a harrowing reminder of an awful time not long ago when World War II raged. It was the first and is regarded as one of the most horrific attacks on the United States. But few know of another attack which fell on America shortly after.

In April of 1942, the United States launched the devastating Doolittle Campaign, an air raid led by American forces on the Japanese Capital Tokyo and other targets on the Island of Honshu. It was the first of many raids which saw Japan suffer heavily, and they had little to respond with.

New Solution with an Old Technology

America was too far out of range for Japan to respond with air raids using their fixed-wing aircraft. There was no way to retaliate, they could do little but watch as their cities were obliterated by B-25 bombers. High-tech solutions were investigated but were ultimately deemed too inefficient, dangerous, and expensive to execute successfully.

Instead, Japan opted for a remarkably low-tech solution - fire balloons, or balloon bombs - a hydrogen balloon designed to float explosives over the ocean to bring the war to North America.

It would become the first ever weapon with intercontinental range.

The balloon bombs were a cheap response to the devastating attacks which continued to flatten Japanese cities. Filled with hydrogen, the balloon could carry a load of around 20 kg of explosive. The plan was to make use of the jet stream over the Pacific Ocean to float and drop the bombs over American and Canadian cities, as well as wreak havoc on forest and farmland.

The Japanese Balloon Bombs of WWII

Originally, Japan decided to test a large balloon - 9 meters in diameter - to study the atmosphere. Japanese forces later determined the balloons would be suitable to carry bombs over to North America.

Later, a second balloon, this time 10 meters in diameter, was developed to be the bomb-carrying balloon. The envelope (the balloon itself) was fathomed out of paper and rubberized silk. Fully inflated, the balloon held approximately 540 cubic meters of hydrogen, sufficient enough to carry a mixed arsenal of either a 15 kg Type 92 Bomb, 12.8 Kg Incendiary, or multiple 4.5 kg (candle type) incendiary bombs. The payload was rather small since it still had to carry hundreds of kilograms of gear in order for it to reach North America.

On Nov. 3, 1944, Japan unleashed some 9000 balloon bombs over a five-month period, all destined for mainland over the Pacific. The balloons sailed nearly 10,000 km eastward across the Pacific Ocean and onwards to North America. But only a fraction of the balloons made the journey. Over a four-day journey, experts estimate a mere 1000 balloons reached the continent, with only 285 reported as discovered.

Initially, Japan was unaware of the effectiveness of their weapon. American forces urged news companies to avoid publishing reports of discovered balloon bombs to hide their effectiveness from Japanese intelligence. Hiding reports of balloon bomb also helped stop the spread of fear in the people if they realized they were in range of Japan.

The decision to launch in November came with the benefit of a more powerful jet stream. It was a choice made to get as many balloons as possible over the ocean, but it was during the time when North America is cold and wet or covered in snow. Minimal forest fires sprung up, saving the continent from suffering far worse.

Unfortunately, however, the balloons would not come without leaving a mark.

A family of seven, out for a picnic in July on 1945, discovered a strange balloon object. With great curiosity, and without any way of knowing what the device was, one of the family members hit the device and set it off. The explosion resulted in the death of 6, the mother, Elsie Winters Mitchell and her five kin.

The tragedy is the only known instance of a fatality inside the mainland of the United States.

The Problems with a Balloon Bomb

The idea was innovative, however, the idea ultimately failed as a result of poor conditions. It was an ambitious plan with much of its success hinging on the weather forecast.

Many considerations had to be made when designing the balloon. It was made to fly at an altitude of around 11 km. Any higher pressure inside the balloon could cause damage to the skin. Getting around the issue meant designing a valve to release hydrogen as it exceeded its optimal altitude.

The balloons had the ability to descend, but off-gassing to reduce altitude, as well as inevitable losses due to leakage meant the balloons needed a way to rise. Hence, engineers decided to strap on sandbags. 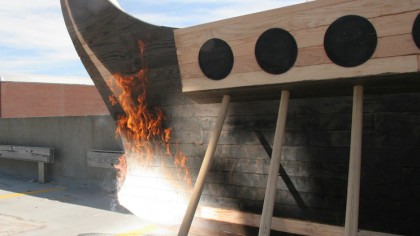 If they dropped below an altitude of about 9 km, an electrically fired shock would detonate a small charge to cut the sandbag loose. It was an effective way of maintaining height, but it came at the cost of carrying a large payload.

The attack of the balloon bombs left may not be known by many, but it still stands as an impressive reminder of the innovation which war brings. Fortunately, balloon bombs were quickly abandoned. They are a relic of the past, but still remain cautious when adventuring along the east coast - you never know what you may stumble upon.