When winter comes around in Japan, people get out their kotatsu to keep away the cold, which is a table, heater and blanket combined.

Most Japanese homes and apartments lack central heating. So, when winter comes around in Japan, people get out their kotatsu, which is a table, heater and blanket combined.

This unique invention solves their winter blues and has another unintended side effect: bringing people together.

The Japanese piece of furniture is composed of a low wooden table frame covered by a futon or a heavy blanket, with a table on top. It has its roots in the open-fire hearths of long ago which were always located in the centre of the main room. They showed up first in the 14th century and the main energy source was coal. 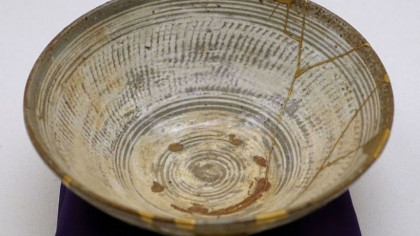 Kintsugi: The Japanese Art of Fixing Broken Pieces of Pottery With Gold

A blanket and a moat-style border were added on later in order to trap the heat and keep people's feet warm. It's a bit like a campfire, except it's inside. These warm hearths provided heat to both cook food and provide warmth for the entire house. They still exist in some ancient Japanese homes.

Modern kotatsu come in two forms: electric and charcoal. The charcoal type is a carry-over from ancient times, but it still exists. In this kind of kotatsu, a pit is dug out and charcoal sits in it. A grate is then put over this pit and the heat is trapped inside a blanket. This kind, of course, cannot be moved.

Modern electric kotatsu, however, can be moved around because its heating source is usually electric and attached to the table. So, if you want to change the set up to a different part of your house, you can.

Napping is an accepted and widespread activity during the cold Japanese months. People do not generally sleep at night under the kotatsu, due to the possibility of getting burnt, but it's interesting to learn that cats do! Another reason the kotatsu developed is that Japanese homes do not have good insulation. They are built in a drafty style, mostly because the humidity is very high during the warm seasons.

I lived in Japan for about a year and a half and I can definitely say that the kotatsu is an ingenious and cosy invention.

Japanese encephalitis was spotted in Australia. What do we know about it?