A 35-year old Japanese man has married a holographic Vocaloid star because he says he distrusts women.

A thirty-five-year-old Japanese man has married a small doll in the form of Japanese Vocaloid pop star Hatsune Miku. Akihiko Kondo, tweeted a photo of himself in a dull white suit with his new bride in a tiny white dress.

Kondo says he distrusts women after being bullied at work but found solace in a relationship with Miku. In the wedding announcement tweet, Kondo says he invited 39 people to the ceremony including a member of parliament.

It is unclear what legal status the wedding has in Japan. The ceremony included rings and the signing of a wedding certificate.

“We would like to express our deepest gratitude to those who supported us,” Kondo tweeted. Japan has a long history of unusual weddings.

In April last year, it called for ‘eligible grooms’ who could apply to marry their favorite character. The lucky man married his chosen character complete with a kiss.

A video from the ceremony, shows the groom wearing a VR headset so he can see his bride at the altar. Once officially announced married a studio assistant steps up to the gamer groom with a pair of fake lips on a stick for a quick peck.

Virtual relationships are seen as a stepping stone to reality

Game makers say they created the game to help young men get more confident and by offering the weddings they say they show that marriage and family is a logical and a necessary step in a relationship. One groom that went through the bizarre ritual claimed "The ceremony was quite complete as I saw in the scene," he said. "The visuals of the ceremony were almost the same as what I like; matching to my taste." 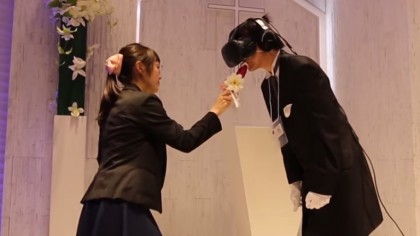 While these ceremonies might seem to be a stunt for corporate publicity or self-promotion, other see the one-sided relationships as a sign of the times. Japan’s notoriously brutal work weeks leave little time for face to face dating and so apps and games that provide a virtual companion are growing in popularity.

For men, in particular, the dating scene is portrayed as rife with dangerous and potentially ego-crushing scenarios which are impossible to counter in the virtual world. However, it isn't just Japan that is turning to virtual relationships.

Sexting without the commitment

Invisible Girlfriend is a service that offers ‘a digital version of a real girlfriend without the baggage.’ Basically, users build a story about how they met their dream partner then enter into a texting only relationship.

The site promises that all the replies are from real people and no bots are ever involved. Straight women can also get involved with the service ‘Invisible Boyfriend’ that proposes Tired of being hit on by creeps? Invisible Boyfriend allows you to craft your ideal partner. Problem solved.’

Digital twin: How a virtual representation of a system boosts effectivity