Marrying your favorite anime character via virtual reality is now possible in Japan. Japanese men have been falling in love with virtual women via the Niitzuma Lovely x Cation dating simulator game and it seems tying the knot is the next logical step.

The game, developed by Japanese studio Hibiki Works, lets players date one of its three anime characters. Before the game was released in April, it called for ‘eligable grooms’ and it was one of these lucky chaps that got to walk down the aisle this week and marry a computer game character.

The Bride and the groom

In typical Japanese style, the wedding hall is really elaborate. In the video from Ruptly TV you see the groom getting fitted with a VR headset and headphones before going through a typical wedding ceremony. Creep factor goes into overload when the priest proclaims them husband and wife and the gamer leans in to kiss his non-existent bride, at that moment an assistant scurries forward and plant a set of fake lips onto his mouth.  You need to see to believe.

The game offers one of three characters to fall in love with Yuki Isurugi who has long black hair, Aiko Kurihara sporting a modern short brown haircut or you can choose Nono Naruse the blonde haired protagonist.

Game makers say they created the game to help young men get more confident and by offering the weddings they show that marriage and family is a logical and a necessary step.

We aren’t convinced but one groom that went through the bizarre ritual claimed "The ceremony was quite complete as I saw in the scene," he said. "The visuals of the ceremony were almost the same as what I like; matching to my taste." 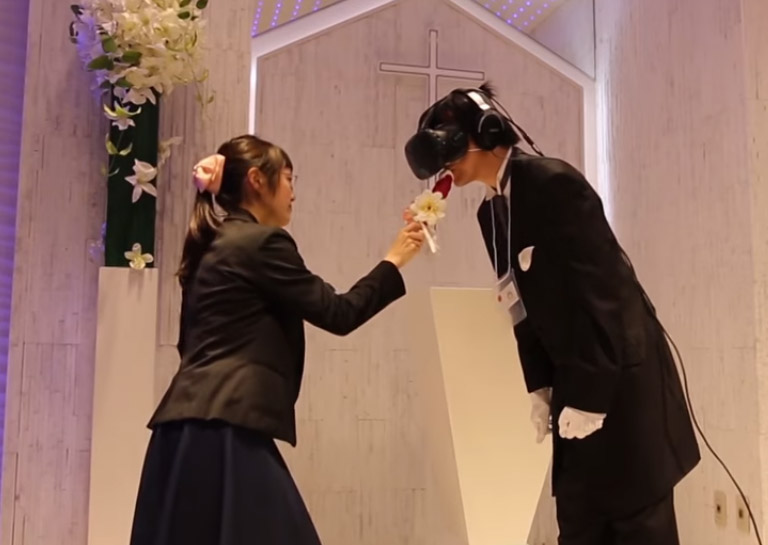 Dating games are super popular in Japan. The nation is notorious for its grueling rigorous work schedules that don't allow much time for regular socializing. In the last decade, a lot of weird dating apps and games have been released to huge popularity. The games vary in detail and scope and are generally designed to appeal to heterosexuals. The games are also heavily gendered. Games marketed towards men, tend to allow the man to 'tweak' the female character to their preferences and have a more overt sexual tone to them. Flirting is key and the man plays a role of protector and benefactor, buying gifts and offering advice. Games pitched at women tend to be more narrative based and don't give as much control over the male character's personality.