Scientists will soon begin shooting an asteroid with bullets to see what its made of.

Scientists at the Japanese Aerospace Exploration Agency (JAXA) are preparing to shoot bullets at an asteroid to in order to determine its chemical composition.

Who Gave a Space Probe a Gun?

Well, while not quite a gun in the traditional sense, the Hayabusa2 probe recently landed on an asteroid named Ryugu armed with what’s called a projector, and it will do the job just as well out in the vacuum of space.

According to JAXA, the projector will get up close and personal with Ryugu and shoot a bullet—technically called a projectile—into the surface of the asteroid and gather whatever material the bullet kicks up for analysis.

This way, Hayabusa2 will be able to get a sense of what material the asteroid is made from. If the technique proves successful, it could give us a way to prospect asteroids in space for mining purposes in the future. 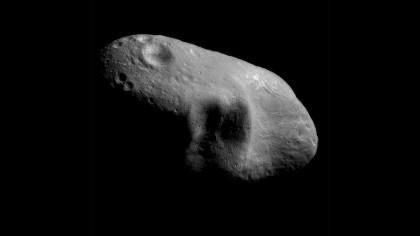 Scientists Want to Carve A Space Station Out of an Asteroid

Using similar parts to what the Hayabusa2 has onboard, the Hayabusa2 team, working with Professor Hideaki Miyamoto of the University of Tokyo’s Graduate School of Engineering, built a vacuum chamber and a simulated surface of the asteroid using different grades of stone, rock, gravel, and soil to simulate Ryugu's surface material.

Then, they used a projector similar to Hayabusa2’s to shoot a projectile into the simulated asteroid surface and measured how much material was kicked up. Not only did the bullet break up the rock that it struck, which was expected, but it also disrupted surrounding gravel as well, breaking that up as well and kicking material into a waiting sample collector.

In this simulated collection test, the sample team reported better than expected results, so Hayabusa2 will be given the go-ahead to start shooting up Ryugu as soon as it's ready.

UAE's Hope Probe Is Arriving at Mars This Week

Future of Deliveries: UPS Will Soon Deliver Packages with eVTOLs