Japanese Spacecraft Landed on Asteroid and Sent Us a Selfie

Hayabusa2 landed, collected samples and snapped a pic all in less than a minute.

As we know, Japan successfully made some pretty cool space history this week. The small country sent a spacecraft to the surface of asteroid Ryugu, where it collected some samples before jumping off again.

SEE ALSO: MINING IN SPACE: WHAT IT MEANS FOR THE ECONOMY?

JAXA has now released some images from the mission that show the historic event. The mission started way back in June when the Hayabusa2 spacecraft arrived in the vicinity of the asteroid.

The spacecraft then deployed two tiny rovers to the surface of the asteroid to gather information about the best place to collect a sample from. These small cookie-tin sized rovers deal with the asteroid's super rough surface by jumping rather than rolling.

The spacecraft also gathered information using a variety of scientific instruments to better understand the asteroid and its surface. Finally this week, on February 22, Hayabusa2 made contact with the surface of Ryugu and then shot a bullet at it.

Bullet kicked up dust to collect

The spacecraft fired a tantalum bullet at a velocity of 300 meters per second into the surface of the asteroid. The impact of the bullet on the surface kicked up dust which hopefully back into Hayabusa2 collecting tray.

The whole mission took less than a minute. The historic images were taken one mounted after touchdown when the spacecraft was already on its ascent.

In the image, you can see the spacecraft's shadow as it bounces off the asteroid and the dark marks on its surface that show where the site was disturbed.

JAXA helpful marked up the image. The purple circle shows the landing site before (left) and after (right). The red arrow points to the guiding target marker Hayabusa2 dropped onto the asteroid prior to touchdown.

"At the moment," the Japan Aerospace Exploration Agency (JAXA) wrote on its website, "the reason for the discoloration is unknown, but it may be due to the grit that was blown upwards by the spacecraft thrusters or bullet (projectile)."

The work of Hayabusa2 is not over yet. This first collection is just one of three that will take place. By December the hardworking spacecraft will be done and will begin the long journey back to Earth to deliver its samples.

Samples will shed light on the history of the universe 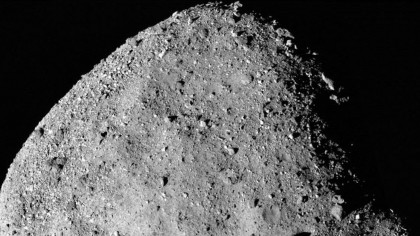 The samples will be used by Japanese scientists to answer fundamental questions about life and the formation of the universe. By excavating the asteroid, the researchers hope to shed light on the questions whether elements from space helped give rise to life on Earth.

Ryugu is located between Earth and Mars and is comprised of nickel, iron, cobalt, water, nitrogen, hydrogen and ammonia. The collection method is also serving as a test for possible future mining methods. If asteroids contain materials useful for either life on earth or on space colonies, this shoot and collect method may become industry standard for space mining.