As many worry about climate change, some countries are taking action on the issue. Of the many developing technologies, solar power continues to be one of the most promising markets for energy production. The biggest issue however, is how much real estate solar panels take up, leaving many countries choosing far more space-efficient power sources. Japan does not have much open land space in which they can efficiently and effectively install solar panels, but they do have a lot of water. Japanese power company Kyocera is killing three birds with one stone and building their solar plants on lakes and reservoirs. 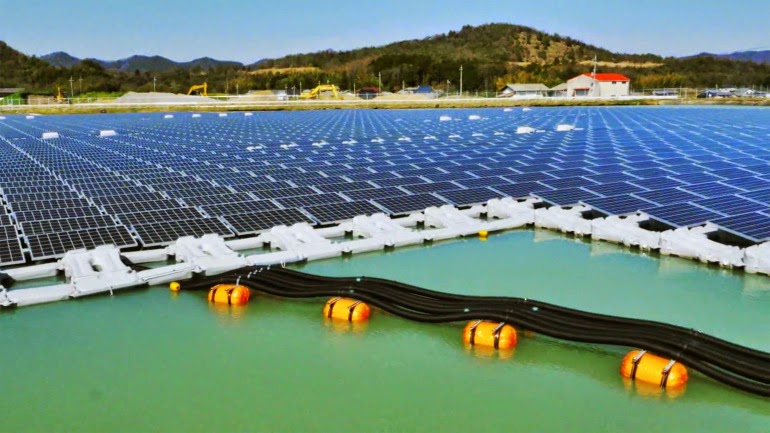 In fact, they have 3 water based solar farms already up and running generating an average of 1.8 MW. In an effort to expand this portion of their industry, they are undertaking an ambitious mega project floating on the Yamakura Dam. Construction recently began on a 13.7 MW floating solar array which will be the largest floating solar plant by more than 6 times. The farm will cover a total area of 44 acres and generate enough electricity for 5,000 households, equivalent to 16,000 MW hours per year. 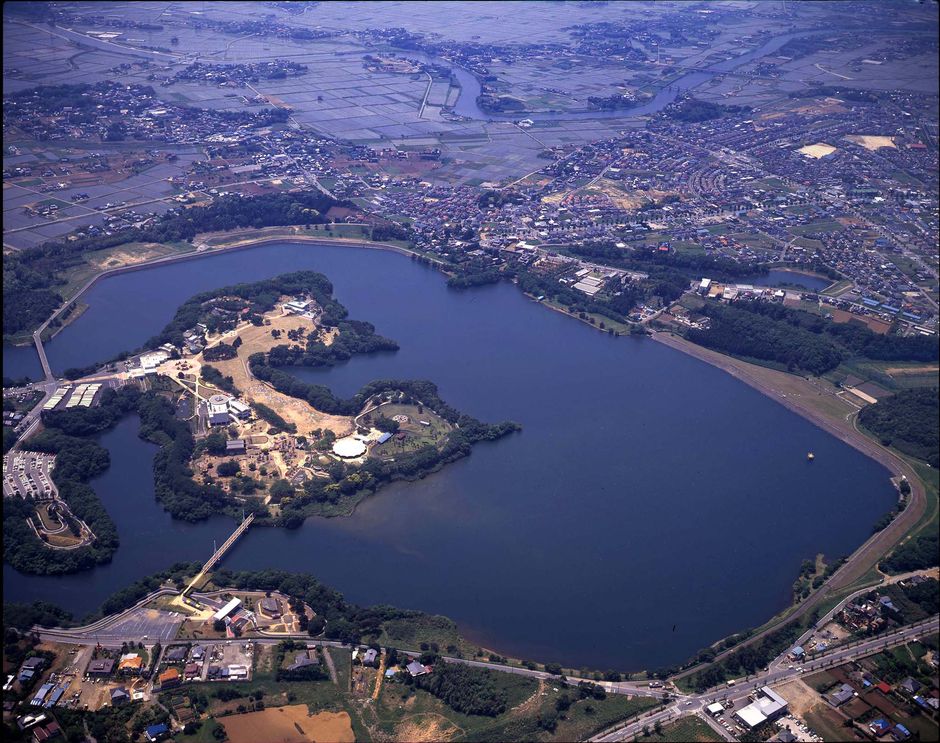 A look at the reservoir where construction of the plant has begun  [Image Source: Kyocera]

The plant lies 32 km east of Tokyo atop one of their drinking water reservoirs. Not only does this project help generate electricity, but floating solar solves two other issues. First, by being placed on the water, the panels are cooled through the natural temperature difference of the water making them 11 percent more efficient. As far as drinking water and reservoirs are concerned, algae growth and evaporation are other major concerns. This has even lead one California water supply company to place millions of small black balls into their open-air reservoir. Floating solar panels atop reservoirs solves these problems, and it does it well. The shade provided from the panels not only cools the water but shades it from sunlight preventing algae growth.

Floating Solar isn't an incredibly new technology, but it has been in its major testing phases up until recent years. The U.S. has even implemented solar farms on waste water treatment facilities as well as reservoirs, but nothing to the scale of Kyocera's plant in Japan. The project which has a targeted completion date of 2018 will lead the way for further development of this technology. One of the floating solar plants currently producing energy for Japan can be seen below.

Large scale implementation of  solar panels is gaining traction, but as mentioned before, land can be expensive. Waterborne real estate continues to prove itself as the perfect solution. Not only are there benefits to the water and the solar panels, as it turns out, the systems are incredibly strong. It is predicted that water based solar arrays can withstand 120 mile per hour winds and earthquakes of very strong magnitudes. The question then needs to be asked, why isn't everyone building this style of power plants?

The biggest negative to solar power, as previously mentioned, is how much area they take up in comparison to how much electricity they produce. The Kyocera plant on the Yamakura Dam reservoir will be the world's largest water plant, but this 44 acre giant will still only produce enough power to supply 5,000 homes. To put this in perspective, if one were to build 44 acres of coal fire plants, the energy production would be over 10 times higher. The push for renewable energy will continue, but more innovation needs to happen first. 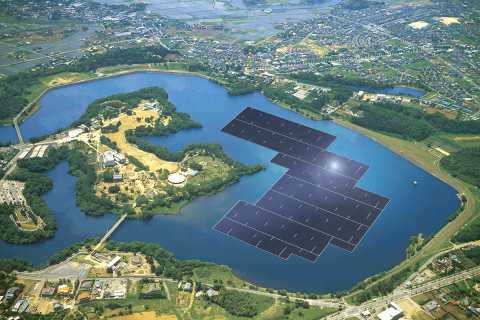 Japan aims at making the switch to 100% renewable energy by 2040 and floating Solar will possibly be one of the leading producers for the country. As technologies within renewable energy progress, more efficient forms of energy production will become available. For now, floating solar appears to be one industry that is solving more problems then it creates for the energy industry. The only thing stopping further development within floating solar is the start up cost of panels.

While floating solar power farms will probably not save the world, they are a major step in the right direction when it comes to sustainable energy. The ability to passively collect energy from the sun while also keeping drinking water cleaner is an enticing solution. Kyocera's massive plant will continue to lead the charge for a renewable energy powered world.