Sometimes there are videos that are so incredibly intense that you can't help but to just sit there and watch on in awe. This is one of those videos. SAAB's new Gripen Fighter jet claims to be the "next generation of smart fighter," and this video sure gives it the appearance of living up to its name. In order to film an aircraft that travels at over 300 knots per hour, or 555 kph, a special high speed, gyro-stabilized, camera rig was developed by a Swedish company named Blue Sky. The rig combines a 6K Dragon digital camera with a US$40,000 Canon lens, according to Sploid. The rig created was then suspended from the weapon's station of one of the fighters and the result is this amazing video of SAAB's new aircraft.

Not only is the fighter jet stunning to watch operate, but the technical and optical skills required to capture this footage is equally amazing. Imagine the stabilization and frame rates necessary to get such smooth transitions, and even the skill of the filming pilot.

"Our philosophy is to push boundries in everything we do, In this case we needed to do both still photography and footage at the same time to maximize outcome. One advantage with this system is that we can fly in speeds where Gripen flies more naturally" ~ Jonas Tillgren, Brand and marketing manager At Saab 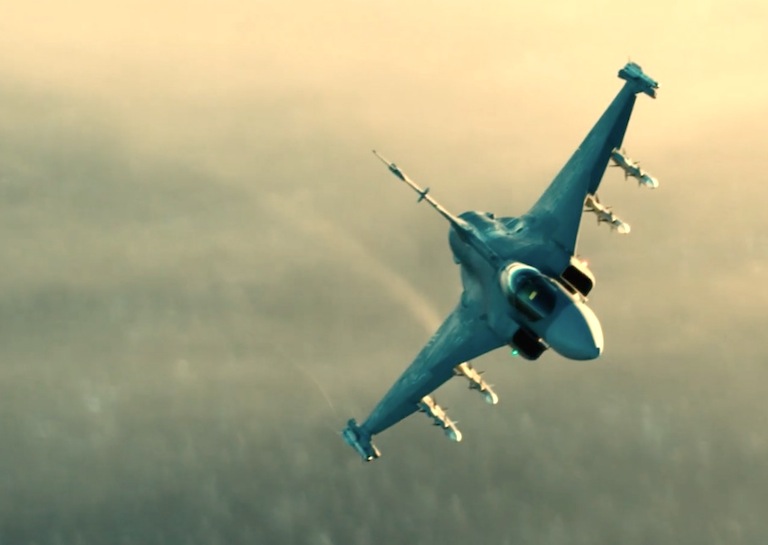 This footage only took two sorties with the new Gripen jet, and the camera crew were even able to use a helicopter for some of the shots.

So, now that your face has officially been melted for the day, what else is there to do? The only thing at this point is to watch the video over and over again imagining you are flying the aircraft at high speeds, I know that's what I'll be doing.