Jeanne Villepreux-Power: Marine Biologist and Inventor of the Aquarium 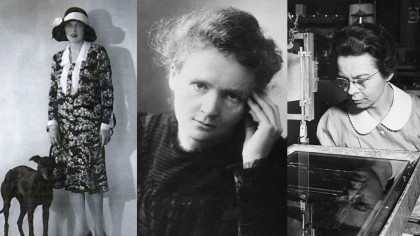 51 Female Inventors and Inventions That Changed the World

Jeanne Villepreux was born on September 24, 1794, in the rural village of Juillac, Corrèze, France. She was the eldest child of a humble shoemaker and a seamstress. Jeanne had a basic education, a very little knowledge more than how to read and write.

When Jeanne was 18 years old, she walked all the way to Paris covering a distance of over 400 kilometers (250 miles) to become a dressmaker.

In Paris, she became the assistant of a society dressmaker. She found fame when she designed the wedding gown for Princess Caroline, the future Duchesse of Berry. Princess Caroline was a Sicilian princess who in 1816 married Charles-Ferdinand de Bourbon, Duke of Berry and the nephew of the French king Louis XVIII.

It was through the commision of this wedding gown that Jeanne met James Power, a rich English nobleman, merchant, and trader. They got married in 1818 in Messina, Sicily, where they lived for more than 20 years.

It was soon after her marriage when Jeanne became interested in natural history. She was a self-taught naturalist who traveled around Sicily recording and describing its flora and fauna, collecting specimens of minerals, fossils, butterflies, and shells. She became fascinated with shells in particular. Jeanne studied countless fish and cephalopods including nautilus, cuttlefish, and octopus.

Her book was a groundbreaking work. It talked about the mathematics and the geometry of the nautilus, also called chambered nautilus. Nautilus are cephalopod mollusks of the South Pacific and Indian oceans with a spiral chambered shell that is pearly on the inside.

Later on, in 1842, Jeanne published her second book, Guida per la Sicilia (Guide to Sicily), a survey of the island’s environment. This book has been republished by the Historical Society of Messina.

Back to the sea

In 1840, Jeanne Villepreux-Power and her husband moved from Sicily to new residences in London and Paris. Ironically, in 1843, most of her marine collections, written records, and other scientific materials were lost in a shipwreck.

With all her life work gone down to the bottom of the ocean and understandably disappointed, she discontinued her research. However, she continued her writing and became a public speaker.

Invention of the first aquarium

Jeanne's invention of the aquarium is perhaps her greatest contribution to marine biology.

In 1834, professor Carmelo Maravigna, wrote in the Giornale Letterario dell’Accademia Gioenia di Catania that Jeanne Villepreux-Power should be credited with the invention of the aquarium and the systematic application of it to the study of marine life.

Jeanne invented three types of aquariums. Her first glass aquarium was specifically designed to help Jeanne with her observations and experiments on the marine species.

By using the aquarium as a tool for her research on marine species' behavior, Jeanne became the first to discover that Argonauta Argo produces its own shell rather than obtaining the shell from another organism similar to hermit crabs.

As a naturalist concerned with conservation, she is also credited with developing sustainable aquaculture principles in Sicily.

She became an accomplished illustrator and expert on marine organisms. Jeanne also reasoned that the tiny organisms that accompanied the egg mass contained within the shell of A. Argo were males of the species. Later, other marine biologists revealed that those organisms were male reproductive organs that attached themselves to the female’s mantle.

After inventing her first glass aquarium, Jeanne developed two other aquarium designs: a glass apparatus placed within a cage for use in shallow water and a cage-like aquarium capable of lowering its contents to various depths.

Jeanne Villepreux-Power died on January 25, 1871. Sadly, Jeanne was forgotten for more than a century after her death. It was not until much later, in 1997, that her work was rediscovered. In the same year, Jeanne's name was given to a major crater on Venus discovered by the Magellan probe.

The Sounds of Science

The Sounds of Silence - Act I in the video below is a performance of human sounds in homage to Jeanne Villepreux-Power's invention of the aquarium. The Sounds of Silence Quiz was part of Science: it's a girl thing! campaign of the European Commission aiming to encourage girls to get involved in science and encourage young women in scientific research careers.