Blue Origin Senior Vice President Rob Meyerson told audiences at the Amazon Web Services Public Sector Summit in Washington last Tuesday that the firm has plans to begin selling suborbital flight tickets in 2019 with plans to launch test trips “soon.” The executive was the keynote speaker in a half-day track on earth and space applications.

“We plan to start flying our first test passengers soon,” Meyerson said. “We expect to start selling tickets in 2019."

Although very little details regarding the cost or time frame of the New Shepard flights have been revealed, the company seems determined to stick to their goal to make suborbital journeys a reality.  The firm's website section dedicated to the New Shepard caters particularly to potential space travelers.

"Sitting atop a 60-foot-tall rocket in a capsule designed for six people, you’ll feel the engine ignite and rumble under you as you climb through the atmosphere."

"Sitting atop a 60-foot-tall rocket in a capsule designed for six people, you’ll feel the engine ignite and rumble under you as you climb through the atmosphere. Accelerating at more than 3 Gs to faster than Mach 3, you will count yourself as one of the few who have gone these speeds and crossed into space," reads the site.

The section boasts about passenger-targeted features such as large windows providing "unparalleled views" and the privilege of experience the "freedom of weightlessness." The customer's would-be journey is also documented in a step by step timeline that reassures passengers that high-definition videos, pictures, and mementos will be provided for keepsakes.

"You’ll also belong to an exclusive Blue Origin alumni network – a community of modern space pioneers. Make history with a suborbital flight, and you will receive early access to purchase tickets for our future orbital missions," concludes the timeline prompting readers to book their first trip to space.

Not ready to go

However, eager spacegoers may want to reconsider rushing to make such plans. So far, Blue Origin has only flown its New Shepard vehicles eight times with its first launch in April 2015 proving testy.

The flight saw a hydraulics problem interfere with the vehicle’s powered landing. The company has insisted that it will await the right time and conditions to offer the suborbital journeys. 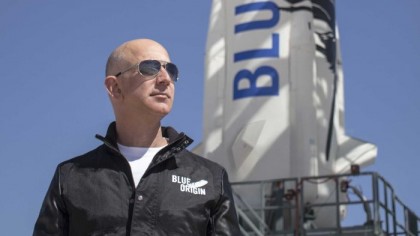 “We continue to be head down on making sure the configuration is good and stable and ready to fly,” said Bob Smith, chief executive of Blue Origin in an April interview with Space News. In the meantime, this has not stopped the firm from aiming for even more ambitious plans to colonize the moon.

“We believe that setting up colonies on the moon is the next logical step towards exploring Mars and beyond,” said Meyerson at the summit echoing a dream often expressed by Blue Origin founder Jeff Bezos. The firm is hiring technologists to work on the company’s long-term outer space-focused goals.

“Our vision is millions of people living and working in space, and we accept there are many ways to get there,” he said. “The task of defining the path forward is what we’re doing now."