John McAfee Says His Twitter was Hacked to Support Other Cryptocurrencies

The cyber-security pioneer, John McAfee made a public statement saying his Twitter account was hacked. The tech industry leader took to Twitter and attempted explain the situation, saying "I have no control over Twitter's security."

Though I am a security expert, I have no control over Twitter's security. I have haters. I am a target. People make fake accounts, fake screenshots, fake claims. I am a target for hackers who lost money and blame me. Please take responsibility for yourselves. Adults only please.

The situation is only made more awkward given McAfee's claim to fame in starting his namesake security software company.

After media outlets attempted contacting Twitter to confirm the hack, representatives from the social media network simply redirected people back to its security advice guidelines. Twitter gives people a two-factor authentication. A user has to enter a code sent to a mobile phone in order to actually use the account, and that extra layer of verification should avoid these types of hacks. 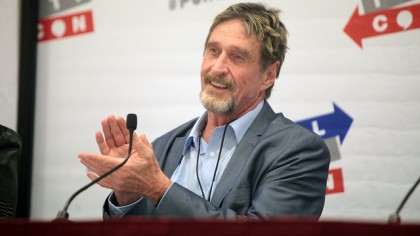 John McAfee, One of Bitcoin's Biggest Advocates, Tells Cryptocurrency Investors not to Give Up

McAfee acknowledges the extra code; in fact, that's where he theorizes the problem started. The cybersecurity expert told the BBC in an interview that he believes the hacker snatched the authentication code. McAfee said his first clue that he'd been hacked was turning on his cellphone to find a notification saying "Attention: SIM not provisioned MM#2."

"I knew at that point that my phone had been compromised," the 72-year-old told BBC. "I was on a boat at the time and could not go to my carrier (AT&T) to have the issue corrected. All that the hacker did was compromise my Twitter account. It could have been worse."

So what exactly did McAfee tweet while being hacked? Well, earlier this month, the avid bitcoin investor and mining entrepreneur of MGT Capital Investments started suggesting obscure cryptocurrencies that others should invest in. He began recommending a "coin of the day," and thanks to his validation, those cryptocurrencies often saw a significant rise with his stamp of approval.

McAfee has since deleted those posts upon the realization that he was hacked.

Is this a stunt?

In April of this year, McAfee showed Newsweek reporters a prototype of the "John McAfee Privacy Phone." This phone, according to McAfee himself, would be the most hack-proof phone in the world

“Enormous investment in hardware costs have gone into this,” McAfee says. “The smartphone contains a bank of switches on the back cover that allow the user to physically disconnect the battery, the antennas for WiFi, Bluetooth and geolocation, the camera and the microphone.

“It also will not allow the phone to connect to a Stingray or any other IMSI catcher device. In addition, it contains a web search anonymizer," he told Newsweek.

The $1,100 smartphone was only available in version 1 with a secondary version set to be released in summer 2018. But was McAfee using this as a cautionary lesson to drive sales toward his phone?

Several of his Twitter followers theorized another idea. Whoever was responsible for these tweets -- McAfee or a random hacker -- could benefit from encouraging others to invest in the random cryptocurrency.