Kalashnikov Concern displayed a prototype of their new hoverbike for Russian officials and the internet. It could be used for a military purpose down the line.

Kalashnikov Concern has unveiled their flying hoverbike in a startling new video. The Russian defence manufacturer, named after the inventor of the AK-4, M.T. Kalashnikov, displayed its newest offering to both company officials and the internet at large.

The cycle has sixteen sets of rotors, runs off battery power and could be used for military purposes in the future. 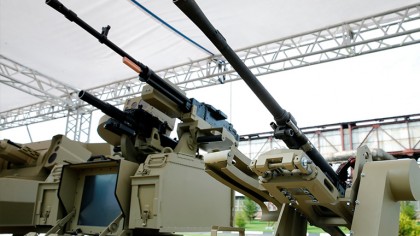 Kalashnikov is already heavily involved with the production of guns and ammunition, along with combat vehicles and automated gun systems.

They’ve recently begun dabbling into vehicles such as the BAS-01 BM “Soratnik,” a semi-autonomous combat vehicle with an autonomous gun turret.

Aesthetically, the flying hoverbike or “flying car” as it’s dubbed by Russian media has a skeletal structure, with a seat and joysticks for manoeuvring, but that’s about it.

The video does show a digitally superimposed cover towards the end, which resembles an insect-like design, but that could be for an updated prototype down the road.

There are two banks of batteries underneath the operator which possibly power the eight pairs of rotors surrounding the driving seat. It appears to fly smoothly, as displayed in the demonstration, which was viewed by a gaggle of Russian officials at the site.

The US is also in the midst of developing their own hover vehicle for military use. Malloy electronics in collaboration with SURVICE, a Maryland-based defense company, is developing a hoverbike for the American military. The aim of the craft is to replace some of the work a helicopter does.

"There are a lot of advantages of the Hoverbike over a regular helicopter. Primarily there’s safety. ith adducted rotors you immediately not only protect people and property if you were to bump into them, but if you ever were to bump into somebody or property it's going to bring the aircraft out of the air," Malloy's marketing sales director Grant Stapleton told Reuters.

Military factions like the US are interested in hovercraft technology mostly because it can take on various roles in the field, it can carry troops, logistics, supplies, be both manned and unmanned and also act in a surveillance capacity.

This isn’t the first attempt at rotor-powered hover device, a private company called Hoversurf teased a demo of their manned electric hoverbike earlier this year.

Called the Scorpion-3, this bike drew more concern than fanfare due to the precarious location of the rotor blades. They seem one bad turn away from chopping off a leg. Despite these worries the company assured the public that its safe, thanks to “state of the art flight controllers.”

It’s still a long way from public use, despite the company’s insistence that they want the bike to be an accessible amateur flier. It’s possible the design will change to allay concerns.