The gunmaker has been busy lately, they recently debuted a hoverbike and mini drone tank, now their focus is electric motorbikes.

Kalashnikov, the manufacturer behind the AK-47 gun, recently debuted an electric motorbike at the Army 2017 International Military-Technical Forum in Moscow, Russia. The company introduced two versions of the bikes, one for military use and the other for the police force.

Not much is known about these motorbikes, Kalashnikov did release a video demonstrating the specs and capability of the vehicle. First impressions suggest that it’s not too bothered by the bells and whistles of other electric bikes on the market, like the Zero DSR electric motorbike which connects with an app on your mobile device, or the Yamaha PES2 ‘s smart helmet system, which creates a kind of symbiosis with the rider and bike.

The Russian bike goes back to basics with flip switches, indicator lights, and a vintage speedometer. The camo accented military version has a range of 100km (60 miles) and is more of a dirt bike model with a gun rack for an accompanying AK-47, while the blue and white bike meant for the police force is more supermoto style and better suited for an urban environment. That bike has a range of 150km (93 miles). Fifty of the police force issued bikes will be used at the upcoming 2018 World Cup, held in Russia.

“Later they are planned to be used at mass events such as bicycle parades and marathons, as well as in park and nature protection zones: VDNKh, Tsaritsyno, and Poklonnaya Hill. This measure is expected to improve the ecological state in the city told the head of the Moscow traffic police Viktor Kovalenko to M24.ru,” says the company website.

A promotional video shows the military version in action, awaiting its rider in a desolate terrain. The rider turns on the bike with a key switch after unplugging it from a charging station. There is also no additional helmet, so perhaps that is being developed later.

This isn’t the first time the prolific military manufacturer has branched out technologically. In September, Kalashnikov Concern— part of the Russian defense giant Rostec, demonstrated a hoverbike prototype. While the gunmakers are calling it a flying car, it resembles more of a bike as it lacks a wheel-base. 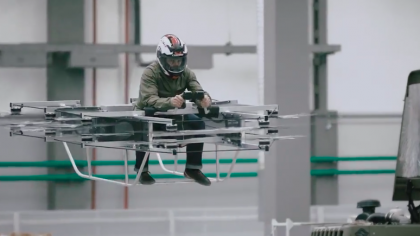 The hoverbike flies using eight rotors joined together by a skeletal frame, a couple of joysticks and a battery pack under the rider, the video accompanying the test drive superimposes a shell over the skeletal structure, pointing to a possible commercial future for the bike.

Kalashnikov is also going down the drone route, with its drone tanks. The mini tank or BAS-01G Soratnik can carry both machine guns and anti-tank missiles and weighs up to 7 tons. It was designed to support infantry and is outfitted with 7.62mm Kalashnikov PKTM machine gun that can be swapped out for a 12.7mm heavy machine gun, grenade launchers and up to eight Kornet guided missiles with a range of three miles.

Via: The Verge, New Atlas, Electrek