A New Zealander kayaker was shocked when a seal fighting with an octopus jumped out of the water and threw the octopus in his face.

A group of kayakers in New Zealand are still reeling over a weird incident involving a seal and an octopus. New Zealander Kyle Mulinder was kayaking with friends near the town of Kaikoura off the east coast of the South Island when they spotted a seal fighting with an octopus.

Seconds later the seal popped out of the water next to Mulinder’s kayak with the octopus in its mouth. The body of the octopus slapped Mulinder in the face before both animals fell back into the water.

Luckily for us, all the action was captured by a fellow kayaker who was wearing a GoPro Hero7. 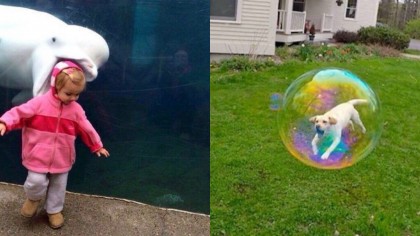 28 Perfectly Timed Photos That Will Make You Look Twice

The footage is almost too good to be true with the seal jumping straight out of the water next to the kayak, basically throwing the octopus right at Mulinder's face before disappearing.

Mulder describes the incident on his Instagram page saying, “After a fun paddle around the peninsula catching waves, we spotted a giant male seal fighting an octopus. Before we knew it, the fight came to us."

Kayakers get up close and personal with nature

The team of kayakers said the octopus clung to the bottom of the kayak for several minutes before being prised off with a paddle by the group's leader. The viral video has created a huge response on social media with many using the incident as an analogy for the current news cycle.

Mulinder will enter kayak viral video fame along with many amateur fishermen who have had all sorts of intimate encounters with wild creatures from sharks to stingrays.

Fishing from kayaks has increased in popularity a lot in the last decade and with it has people’s very close encounters with creatures from the deep.

YouTube is full of unbelievable videos and close calls where fisherman and recreational kayakers get more than they bargained for on a day out.

Seals are a pretty common sight for kayakers in New Zealand. The country is known for its stunning scenery and locals and tourists alike travel to areas where they can marvel at the purity of nature.

Seals commonly eat octopus as well as other animals like squid, shellfish, various types of fish, shrimp, whelk, and other crustaceans such as krill.

Seal population on the increase

Despite octopus being common seal food, they don’t often get consumed without a fight. The eight-legged creatures are known to really put up a fight and several of these amazing battles have been captured.

In an incredible video from Canada, a juvenile seal tussles with a giant octopus in shallow water. The two determined creatures wriggle and writhe to get the upper hand in a desperate bid for food chain supremacy.