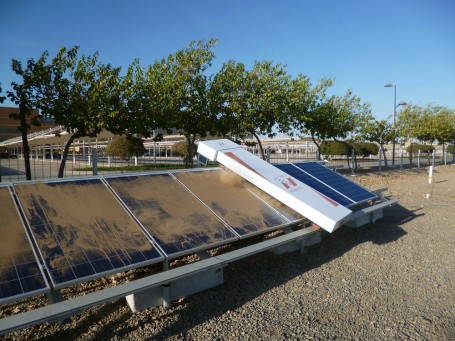 Imagine an environment scorched by 50°C temperatures every day, falling to 40°C at night, with intense wind speeds and thick dust, making it difficult to breathe. Such conditions are, of course, a normal occurrence in deserts around the world. However, deserts, given their high levels of solar irradiance, are a perfect location for solar power generation, that is, except for one major problem – dust.

According to United Arab Emirates (UAE) company NOMADD desert solar, build-up of sand and dust is one of the greatest technical challenges facing solar power arrays constructed in the desert. It creates a daily baseline yield loss of 0-4 to 0.8 percent and energy yield losses of 60 percent are widely reported during and after sand storms. Furthermore, if left in situ for more than a day, dust particles adhere to the panels.

Thus far, dust-clearing operations have relied on a variety of approaches, all of them unsatisfactory. These have included human labour, which is expensive and unreliable; cleaning with water, which is wasteful in areas of high water stress; complex and sensitive equipment that tends to fail in harsh conditions; and cleaning cycles of 7-14 days, which increases output losses from vulnerability to adhered dust and dust storms. These approaches tend to generate high operational expenses and depend on volatile human labour markets.

Harsh conditions ensure the failure of manual cleaning operations, for the simple reason that in many desert environments, it is impossible to physically function for any prolonged length of time during the day or night. Water isn’t always available and supplies may be vulnerable to interruption or rising costs.

A desert solar panel cleaning operation therefore has to fulfill certain criteria. For example, it must be able to clean the entire array at speed, usually in less than a day, irrespective of how large the array is. This requires automation, removing all the problems associated with a manual labour force. The solution must be able to remove dust without using water but without scratching the surface of the panels. It must also be locally sourced, simple and resilient.

For a while, in 2013 and 2014, a team of researchers at Boston University (BU) were working on a self-cleaning device called a transparent electrodynamic system (EDS) that potentially can be incorporated into a solar panel array, embedded into the panels themselves or applied to panel surfaces via a silkscreen-printed film. The device works using a small electric charge, generated from the panels themselves, to elevate dust particles off the panel surfaces. Tests so far have shown that the device can eradicate 90 percent of sand and dust particles deposited on solar panel surfaces.

Lead researcher Professor Malay Mazumder developed the idea from the example of human lungs, which have self-cleaning hairs that remove dust from the respiratory system. Mazumber believed he could apply this idea to other systems.

The idea caught the attention of NASA in 2003. They were seeking a system that could clean equipment of cosmic dust on future Mars missions and so they handed Mazumder a three year grant of $750,000 to further develop the project. Further funding arrived from BU’s Office of Technology Development which awarded him $50,000 Ignition Award funding as of temporary measure. A presentation given to the American Chemical Society conference in Boston in 2010 resulted in articles published in the New York Times and the Daily Telegraph. Mazumder was then contacted by Abengoa Solar, a company that especializes in solar PV and concentrated solar power (CSP) with operations at the Solana Generating Station at Gila Bend in Arizona and the Mojave Solar Project at Barstow, California. As far as is known at present, the device is still undergoing development.

Another option has been developed by Seamus Curran, an associate professor of physics at the University of Houston and director of the Institute for NanoEnergy, which specializes in the design, engineering, and assembly of nanostructures. Curran and his nanophysics team have also developed a self-cleaning system, consisting of a nanohydrophobic material that coats the panel, preventing the build-up of dust as well as guarding against water stains and weathering. The coating forms a barrier which prevents water from adhering to the surface – it rolls off the surface instead, carrying dust and dirt with it.

The coating has been tested at the FOCAS Institute, part of the Dublin Institute for Technology in Ireland and works in marine climates as well as in high dust environments.

Another approach is that taken by the 20-acre Ketura Sun solar plant in Israel’s Negev desert, operated by Siemens AG and Arava Power. This uses a fleet of 100 Ecoppia E4 robots mounted on a frame which moves laterally along the panel surfaces while the robots move up and down during the cleaning operation. The robots use rotating brushes to clean the panels, each brush having soft microfibers to avoid scratching. They also have their own mini-solar panels fitted in order to self-generate the power they need for the cleaning process, instead of drawing it from the solar array. Ecoppia says this approach can remove 99 percent of dust build-up without the need for precious water supplies. 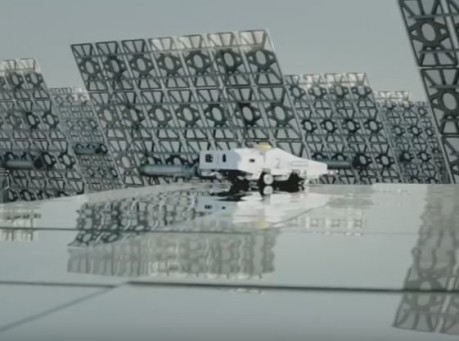 A similar approach is taken by the NOMADD cleaning system and Torresol Energy’s Gemasolar plant near Seville, Spain. The NOMADD system was designed, developed and tested by NOMAD Desert Solar at the King Abdullah University for Science and Technology, (KAUST) near Jeddah, Saudi in Saudi Arabia.

NOMADD (NO-water Mechanical Automated Dusting Device) is relatively low-cost and designed for use in the Middle East and North Africa (MENA) region. Unlike the Torresol Energy approach, which uses a small amount of water applied by its HECTOR robots, the NOMADD system is completely water-free.

At present then, these two approaches, robots and electrostatic charges, appear to be the two most promising avenues for self-cleaning of desert solar power systems, but the technology is developing all the time and several projects are still very much in development.

That means there could be some even more innovative solutions to come in the near future.