There really isn't much that we can say to properly preface the video you're about to watch. Essentially, two guys with a gigantic drone attached a working chainsaw to the bottom and then filmed the experience in all of its deadly glory. Is there a practical purpose for having a flying chainsaw drone, well maybe, but probably not. In the video the duo use the drone to chop off icicles from the side of their barn and trim off the top of trees, even decapitating the occasional snowman. You'll never believe what ends up taking out the drone in the end, a bright pink party balloon. Check out the video below!

So here's the rundown on what these guys built. They took a large octocopter, or a drone with 8 rotors, and attached a small to medium sized chainsaw to the bottom and hooked up some servo motors to control the chainsaw's operation. It would appear that they even built a gimbal that allows the saw to be rotated on two different axes. Why this was a necessary contraption to build is a question we are still wondering, but it is nonetheless awesome.

So in the end the "unstoppable" killer chainsaw drone" gets taken out by a tiny pink balloon that gets caught up in one of the rotors, and causes the drone to crash to the ground, likely bringing an end to the chainsaw drone's terror. The only practical purpose that we can see for this drone is for self defense in the impending zombie apocalypse. 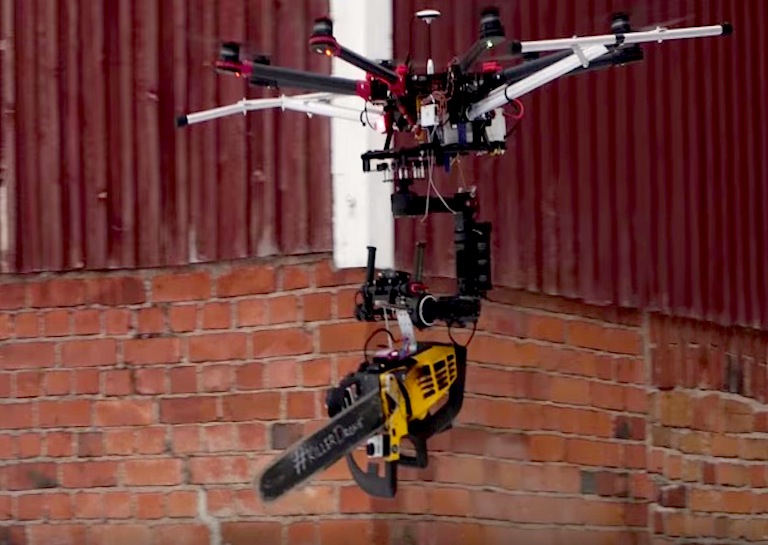 So next time you look up in the sky and say to yourself, "it's a bird, it's a plane!" just realize that it may in fact be a killer chainsaw drone controlled by some evil mastermind. Sometimes, engineering takes you to places that you never thought you would end up, like in the workshop building a chainsaw drone.