The latest electric supercar concept from Lamborghini is electric but doesn't have any batteries.

Lamborghini is developing an electric supercar that doesn’t run off batteries. The car maker is teaming up with researchers from the Massachusetts Institute of Technology (MIT) to create a concept vehicle called Terzo Millennio. The futuristic-looking machine is outfitted with supercapacitor technology instead of batteries and has a self-healing carbon fiber shell.

Batteries too heavy for supercars

Supercapacitor technology isn’t really developed enough to make it a feasible option for production cars just yet. But Lamborghini is determined to push the technology in the right direction. The carmaker is dedicated to developing a fully electric supercar but has noted that no matter how good batteries are at the moment they are still too bulky for their liking. And even if the smallest batteries were used to lighten the load, they would lose charge too fast and not be able to power the car at the desired speeds. Maurizio Reggiani, Lamborghini's head of research and development was quoted: "If I have a super sports car and I want to go the [race track], I want to go one, two, three laps without having to stop and recharge after every lap."

No doubt, Tesla CEO, Elon Musk will be keeping an eye on the Lamborghini/MIT collaboration. It was the serial entrepreneur that famously predicted supercapacitor technology would replace the lithium-ion batteries we are so familiar with today. 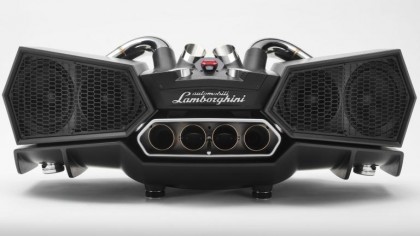 In this concept vehicle, the supercapacitors are created from the carbon panels of the car making the whole thing super light But they also have their downsides, they aren't very good at storing large amounts of power over a long time. So at the moment, their use is reserved for instances that need quick spurts of energy. Reggiani admits developing supercapacitors that can store energy as it is also dispersed is the team's biggest challenge.

In typical Lamborghini style, the Terzo Millennio is all-wheel drive: four electric motors are housed within the car's sleek design. Possibly most fascinating about the concept car is the car's physical construction. Made from carbon nanotubes, Lamborghini says the material can have self-healing properties. That is if the car experienced a hairline fracture the material could repair itself. While the exact properties of the material are unknown, it's clear that Lamborghini is dedicated to really being industry leaders in these new technologies. Stefano Domenicali, the head of Lamborghini, said: “We are inspired by embracing what is impossible today to craft the realities of tomorrow. Lamborghini must always create the dreams of the next generation.”

Competitors to keep an eye on

While this car definitely marks an exciting collaboration between the Italian icon and the North American research team. There are some other players in the supercar field to keep an eye on. Most notably are the Croatian startup company Rimac and the Chinese company Nio.

Rimac Concept One vehicle is considered to be the world's fastest production electric vehicle. Top Gear Host Richard Hammond famously crashed one of the vehicles during the filming of the show in Switzerland in June this year.

Next Level Cyber Security: FBI Teams Up with "Have I Been Pwnd"