By  Kashyap Vyas
Sep 29, 2018
University of the Witwatersrand

If you were ever to search the internet for the largest ever dinosaur, the answer is unanimously the Argentinosaurus huinculensis. The giant was 130ft long weighing close to 100 tonnes.

However, the dinosaurs as a species changed over time. Hence, paleontologists divided the time frame into Jurassic eras. There are three Jurassic eras – Triassic era, Jurassic era, and the Cretaceous era.

Dinosaurs changed their shape and size during these three eras. This also means that each era had a titan dinosaur that was the largest of its period.

Ladumahadi –A giant Thunderclap at Dawn 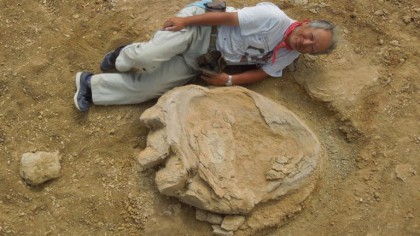 "The name reflects the great size of the animal as well as the fact that its lineage appeared at the origins of sauropod dinosaurs. It honors both the recent and ancient heritage of southern Africa," said Jonah Choiniere, study author and paleontology professor at the University of the Witwatersrand in Johannesburg, South Africa.

The Argentinosaurus huinculensis, the largest dinosaur species, lived in the late Cretaceous period over 99.6 million years ago. The Ledumahadi mafube is dated back to 200 million years back into history.

The discovery was made by researchers from the University of the Witwatersrand, Johannesburg. Ledumahadi is believed to be the close relative of Sauropod Dinosaurs.

They are also herbivores in nature. Researchers are of the opinion that Ledumahadi is a transitional dinosaur, going through the paces of evolution.

The reason for such a derivation comes from the fact that the limbs of the Ledumahadi are thicker and more robust when compared to its brethren, sauropods.

The Transitional Dinosaur Of The Jurassic Era

The Ledumahadi case came into the spotlight when Blair McPhee discovered the bones of an unknown dinosaur. Some of the bones were even sticking out of the ground.

The researcher believes that the dinosaur was around 14 years old when it died.

"The first thing that struck me about this animal is the incredible robustness of the limb bones. It was of similar size to the gigantic sauropod dinosaurs, but whereas the arms and legs of those animals are typically quite slender, Ledumahadi's are incredibly thick." Blair McPhee, the lead study author, said.

When we compare Sauropods with Ledumahadi, the former had column-like limbs. However, the Ledumahadi had more crouched forelimbs.

When first reviewing the posture of the Ledumahadi based on its anatomy, the researchers were a bit confused whether the titan walked on four limbs or two legs. For decoding this very conundrum, they took the data from various reptiles, dinosaurs, and other animals and compared their walking pattern with their limb size.

This gave them enough tangible data to help them conclude that the Ledumahadi walked on all four of its legs.

The findings of this research were published in the Current Biology journal.

Via: University of the Witwatersrand