The alarming decrease in the planet's biggest colony of king penguins has researchers baffled as no cause has yet to be determined.

With environmental issues constantly rising, it has become all too sadly common to see species of animals added to potential extinction lists. Now the French National Center for Scientific Research (CNRS) has reported some tragic news about one of the world's most adorable species.

A steep decrease with no found cause

The center's new study has revealed that the planet's largest colony of king penguins found in the National Nature Reserve of the French Southern and Antarctic Lands has shrunk massively in the last three decades. The researchers, however, were unable to determine the mysterious reason for the steep decrease in population.

"The colony has declined by 88% over the past 35 years, from c. 500 000 pairs to 60 000 pairs. The possible causes of this decline were explored but no plausible explanation for such an unprecedented decrease in penguin populations was found," reads the study.

The giant colony of king penguins, called Aptenodytes patagonicus, was known since the 1960s but due to its unique isolated location, new estimates regarding its size were not made in the past few decades. In the new study, CNRS's team used high-resolution satellite images to compare and track changes in the colony's size evolution over time by evaluating its contour.

In 1982, when the island saw its last scientific crew visit, the island was home to 500,000 breeding pairs and over two million penguins. However, over the next few decades, the colony began to diminish leaving its territory to be overtaken by encroaching vegetation.

Theories considered but not confirmed

Researchers estimate the decline began in the late 1990s and could have been the result of an El Niño-related climatic event in the Southern Ocean that would have hampered the colony's foraging resources. The species' large population size would have seen the natural disaster engender fierce aggressive competition amongst the penguins leading to a tragic drop in numbers.

Another theory is that the Avian cholera currently decimating populations of seabirds on other islands in the Indian Ocean would have reached the king penguins as well. However, none of the current options explored have yielded a substantial enough reason for such an extreme decline. 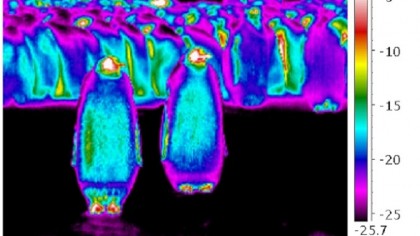 CNRS is now initiating field studies, with support from the French Polar Institute (IPEV) and TAAF nature reserve staff, to examine potential causes. The organization has already issued severe warnings about the danger of extinction of Antarctica's penguins.

Last February, another study by the center stated rising temperatures and overfishing could see king penguin populations in the Antarctic disappear by the end of the century. The research said as much as 70% of king penguins would be forced to find new breeding grounds or cease to exist.

Should the newly discovered decline be proven to also be from environmental causes, the event could prove even more threatening than initially presumed. For now, we will have to wait to see what the new investigations reveal.

CNRS's new study was published in the journal Antarctic Science.