Amazon has just been given a patent for a drone which can react to hand gestures and human voices. This device can be used for package-delivery, according to the company.

First, Alexa seemed to read the minds of millions Now, Amazon's latest investment could allow drones to read our hand signals. Amazon.com was recently granted a new patent by the U.S. Patent and Trademark Office (USPTO) for a drone that can be used for delivery and respond to human gestures.

Amazon has expressed desire to develop a fleet of unmanned aerial vehicles that can send packages to customers in 30 minutes or less. The patent has been issued this week and it says that the drone can adjust its behavior depending on a person's gestures. This can be a thumbs-up, shouting or waving of arms. The machine can release the package it's carrying, change its path of flight to avoid crashing, ask humans a question or cancel the delivery, the patent says.

Give commands to the machine

The patent design includes several illustrations. Among the illustrations, a person is shown outside a home, waving his arms about. This is to show an example of someone gesturing away a drone flying overhead. There is a voice bubble coming out of the man's mouth, possibly giving commands to the incoming machine.

"The human recipient and/or the other humans can communicate with the vehicle using human gestures to aid the vehicle along its path to the delivery location," the patent says.

The drone’s communication system would probably include a variety of sensors. Among these is a depth sensor and cameras to detect visible, infrared and ultraviolet light. The drones would also be able to recognize hand and body gestures, human voices and movement. This would also include a person walking closer to the drone or away from it.

Other devices using gestures to control

The patent says that if the drones are given permission to deliver, they can release the boxes with extra padding from the air. The patent also says that they can land and then offer the parcels.

Amazon has so far applied for several patents after announcing plans for an air delivery service. These include the use of giant airships which could serve as mobile, flying warehouses. There are also designs for drones that self-destruct during an emergency. Amazon has not yet commented on when or if the drone with the gesture-recognition system might hit the market. 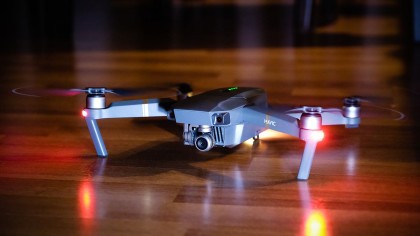 Amazon made its first autonomous drone delivery to a shopper in the United Kingdom in 2016. It also has a private customer trial for drone delivery going on in Britain.

Amazon is not the only company planning a device which would use human gestures to control. There is also DJI's Spark drone which can be directed with arm movement. There has also been a recent Samsung patent, which is showing a drone which can track users' eyes, heads and hands. This drone can also be controlled through gestures.